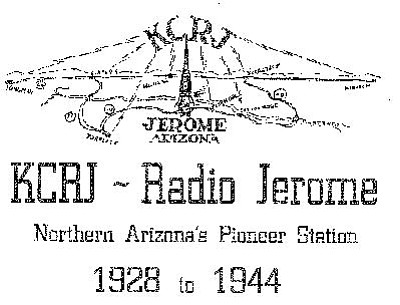 The letter ‘K’ indicted a station that was west of the Mississippi River; the letters CR stood for Charles Robinson, KCRJ’s owner; and the “J” either stood for Jerome or jeweler. (Robinson was also a jeweler and his store was located in the old Arizona Discoveries building on Jerome’s Main Street.) Courtesty collection of Richard Martin

Jerome's history threads and weaves into the lives of new Jerome residents. The roots of history become part of their hearts.

It is no accident that Richard Martin and Chuck Runyon, co-founders of KZRJ FM-LP adopted the call letters KZRJ for their new Jerome radio station to mimic the call letters KCRJ, the FM radio station that existed in Jerome from 1928-1944. Residents of Jerome since the 1970's, they are avid collectors of Jerome memorabilia. Much of their work in Jerome is restoring historic buildings.

The KCRJ headquarters was located in a concrete building across from Jerome's old Mingus Union High School. Today the KCRJ building has sadly deteriorated.

According to Wayne Fernyhogh, Chief Engineer from 1941-1944, "The station became the nerve center of the town, and in Jerome, when a cat could get lost there would be announcement about it on the radio...they geared some their programming to the people of Jerome. The population of Jerome during that time was 60 percent Mexican American. They had more than one fine Mexican-American program and a Mexican-American announcer." http://www.smecc.org/kcrj_jerome_az.htm

Among Richard's personal collection of Jerome artifacts is a copy of a letter written in 1938 to a new advertising sales representative. The letter outlined the terms of payment and described something the community that was served by the station, including the Spanish-speaking one. "Keep in mind that 40 percent of the population that listens to KCRJ are Spanish speaking and they enjoy our daily Spanish hour; our Spanish announcer has quite an influence upon them. Play upon this fact; lots of them buy flour, cooking compounds, meats, etc. They have to have their teeth fixed at reduced prices. . ."

Jerome residents Flossie McClellan, Mary Evelyn Starkovitch and Zella Davis, three KCRJ employees found it easy to get jobs at KCRJ because most of the men worked for the mine. They were still attending Jerome's Mingus Union High School when they were hired.

Flossie lived on my street when I moved to Jerome in 1980. Every day, she used to come out of her house in a tattered pink bathrobe and walk up and down the street calling her cat. Zella helped start the Community Service Organization in the nineteen sixties that held historic home tours to help raise funds for town projects. Mary Evelyn's father was a mining foreman and the family relocated to another mine when it closed.

Mary Evelyn offered this reminiscence of the old KCRJ's last broadcast in 1946. It is a prelude and a paeon to the dying mining city.

"I don't remember what I had on... but I know there was this lump in the throat feeling that you just didn't want this day to happen....You knew it was coming, you had known for a while, but you didn't want to admit that today was the deadline... today was D-Day so to speak.... and there was sadness.. and when people are sad they don't quite know what to say to each other.... so we say nothing... you do what you have to do and perform in a robot like atmosphere.... and then you cry....  It was sad because it was like a little part of Jerome was dying along with the rest of Jerome, which was a very thriving community for many years prior to the time that the town did start closing the doors...the mines had closed... the people were moving away...the war was over...and the people that had come back from the service, had gone on to colleges elsewhere or moved on to make their lives elsewhere. The radio station was one of the last toe-holds so to speak in the past, and when I gave the final broadcast it was with tears in my eyes as I bade farewell to all of my friends.... because we knew that the station would not be coming back, because the town as we knew it was not coming back. But it was a tearful closing because there was as I say a lot of history and memories being closed behind those doors." http://www.smecc.org/kcrj_jerome_az.htm

Diane Sward Rapaport is the author of Home Sweet Jerome: Death and Rebirth of Arizona's Richest Copper Mining City. The book is widely available in the Verde Valley and Jerome. www.homesweetjerome.net