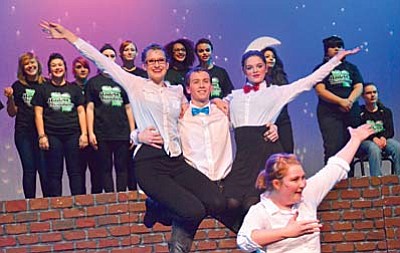 COTTONWOOD -- The stage is set for Mingus Union High School's largest show of the year to debut Friday at 7 p.m.

Senior Kiera Knapp has been in both previous musical revues, and this year is playing Lord Farquad in Shrek, Nina in Rent, and Joanne in Shrek.

"Mr. Ball had the medleys, and then he invited us to audition for individual solos to fill the gaps between those medleys, so that's kind of what my role as Nina is," she said. "And then Farquad is something that I kind of decided all of a sudden that I wanted at rehearsal. Mr. Ball said, 'Who wants to try out,' and my hand slowly slid up."

As Farquad, she said she's looking forward to playing such an odd character.

"I get to probably have the most fun on that stage, walking out with my tiny little legs," she said. "I'm excited to portray fun, and I hope the audience reads that and has as much fun as we're all having onstage."

Knapp came to Mingus from American Heritage Academy her sophomore year. She joined theater, and has been involved with several past shows as a crew member.

She'll be attending Southern Utah University in the fall to study chemistry, where Ball and his theater students travel to for the annual Shakespeare Festival.

Ball said he started the musical revue two years ago to grow the Mingus choir. From one group of 30, to one group of 60, to this year's addition of a separate audition choir.

The singers have been working on the Modern Broadway music since August.

"It's the most students onstage the entire year," he said.

Advance tickets are $9 for adults, $8 for seniors, and $6 for students and children. They can be purchased at www.showtix4u.com or in the MUHS bookstore. Contact the box office at (928) 649-4466 or by emailing James Ball at jball@muhs.com.

All tickets are $2 more at the door.