Commentary: King Holiday a path of painful memories for Arizona 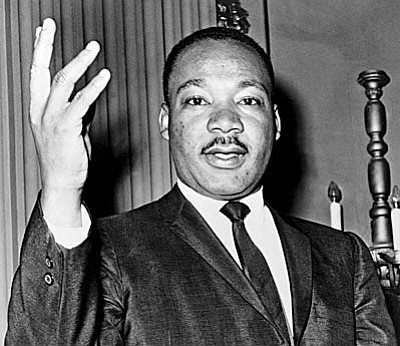 Folks in Arizona have come to accept Monday's Martin Luther King, Jr., holiday as a fitting memorial to a great American.

But it wasn't always that way. We weren't the most embracing and when we were it was for all the wrong reasons.

It was short-lived when Glendale car dealer Evan Mecham became the state's first Republican governor in a dozen years. Just as he had promised during his campaign for the state's top job, one of Gov. Mecham's first acts in office was to rescind Arizona's Martin Luther King, Jr., holiday. It put Mecham in the national spotlight. It painted Arizonans as a bunch of backwards-thinking racists and made the state weekly fodder for the comedy writers of Saturday Night Live.

For Mecham, his decision to abort the MLK holiday began a chain reaction of events that ultimately saw him become the first governor in American history to hit the trifecta of being booted from office. Simultaneously, he faced impeachment proceedings, a recall election and a felony indictment.

But even with Mecham out of the picture, things still did not fare well for Arizona as far as the MLK Holiday was concerned. Arizona voters twice rejected ballot issues in 1990 that would have created a state holiday for Dr. King.

While this further stained the state's image, it especially created a black mark for Yavapai County. Overall, the dual MLK ballot issues in Arizona in 1990 were narrowly defeated across the state by about 17,000 votes. Yavapai County provided 16,355 of those "No" votes.

The one true beacon of common sense in Arizona, and Yavapai County for that matter, during this controversy was Jerome. The State of Arizona did not have an officially recognized holiday for Dr. King, but the folks in Jerome most certainly did after the Town Council established it via municipal ordinance.

Former town clerk and later the town's mayor Al Palmieri said, "When the federal government came in telling the state to get on the wagon with the rest of the nation, we were the first to do it. The Town Council voted to recognize Dr. Martin Luther King Jr. as an official town holiday in Jerome."

In the early years of the holiday in Jerome, Palmieri said the community held candlelight observances in the town park "and we kept doing it for several years even though it was not popular with some people."

Current Mayor Lew Currier said Jerome's ground-breaking vote in Arizona is consistent with the town's stand on similar issues throughout its history.

"Jerome has always been a little left of center," said Mayor Currier. "We have always been more open to that sort of thing than the rest of the state. We were the only precinct in the state that never voted for Reagan. We were the first town in state to officially support the Equal Rights Amendment for women. We just recently voted to adopt civil union permission via town ordinance. The action the town council took back then is very consistent with the overall attitude that exists up here."

The failure of voters in 1990 to approve the King holiday prompted the National Football League to move the 1993 Super Bowl from Sun Devil Stadium to Pasadena, Calif.

And so began the push that eventually saw Arizonans approve the King Holiday in November 1992. This time, 61 percent of the state's voters supported the holiday, thanks largely to a massive advertising campaign fueled by business interests simultaneously lobbying the National Football League to bring the Super Bowl to Arizona, which they eventually did in 1996.

Short of the sense of decency that existed in Jerome, Arizona's history concerning the MLK Holiday is nothing short of an embarrassment for the state. In the end, after stubbing our collective toes for six years, we finally did the right thing, but probably for the wrong reasons.