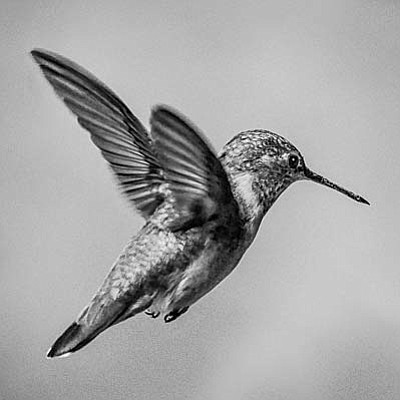 My wife Holly started toward the fading blloms of the Hesperaloe plant brandishing a pair of clippers. A hummingbird jumped between her and the plant daring her to cut down the blossoms that were still in use. She backed away and decided to hang a feeder. We now have three working feeders at our house in the Village. There's a history with Holly and the tiny birds in a place far away in the middle of the ocean.

Holly started running hummingbird feeders at our home in the rainforest on the North side of St Thomas in the Virgin Islands. Starting with just one feeder she noticed the birds were territorial. One would run off others making it hard for any to enjoy the sugar water she prepared for them. She hung a second. Then another. Then six feeders moving a big pile of sugar each week. It was amazing. The tiny birds were so smart that when feeders would need replenishing they would track down Holly chirp to her for refills.

It turned out this was a good thing for the hummingbird population on St. Thomas when the ravages of hurricane Marilyn pounded the island over 18 hours. We woke the following morning to devastation. Not a blade of grass or leaf on a tree was to be seen. We stood in shock and awe at the power of nature. Five of us were gazing at the lack of green and piles of debris when a hummer came up and landed on Holly's little finger and chirped at her. It had been 18 hours since the birds had been able to eat.

Knowing they may die with no energy source for 24 hours we were all made to jump to and get the feeders hung she had prepared before the storm.

Within a couple hours all six feeders were being used with every hole occupied with three to four birds behind each waiting their turn.

Imagine O'Hare airport with planes stacked in holding patterns on all their runways and you start get an idea. Literally hundreds of birds tanking back up to recover from the storm.

What's the best way to photograph these fast little critters? First, be willing to put in time studying their behavior. Watch how each bird approaches the feeder.

Get close. When you first move toward a feeding station the birds will stop feeding and watch you. After about five to ten minutes they'll begin feeding again.

Ideally you'll be photographing the birds in full sun because you will want a high shutter speed to help show the wings. Hummingbird wings beat anywhere from 50 to 80 times a second.

That's why you usually get a blur of motion rather than a definite wing shape. To help your camera get to a higher shutter-speed increase the ISO. Depending on your camera be aware that increasing the ISO will often lower the quality of the image.

Experiment to decide what works for your camera model. I personally would rather have a sharp photo at a lower quality than a blurry photo with high quality.

It's best to be on a tripod to steady your camera but here are a couple ideas if you don't want to invest in one. Brace yourself against a wall or fence post. If there's a shelf near your feeding station take a baggie filled with rice and support the camera on it. Always squeeze the shutter button instead of poking at it.

Take lots of photos. The more you take the better you get and the more often you'll get one you can use.

If you decide to set up hummingbird feeders make sure you are ready to care for them properly.

The feeding solution is four parts of water to one of white granulated sugar.

Boiling, then cooling this mixture is recommended to help deter bacteria growth. Especially in warm weather the feeders need to be changed out and cleaned every three to four days. Looking for a feeder?

They are available from Village Ace Hardware. Want more in-depth information on hummingbirds? The headquarters of the International Hummingbird Society is headquartered right here in the Village at La Plaza and is a wealth of information.

Ross Hawkins has ton of stories about hummingbirds and their habits and habitat.

He can share ways to attract them with your garden by planting hummer friendly plants. Stop by and get your copy of The Hummingbird Connection along with the dates of next year's Hummingbird Festival here in Sedona.

Yours in Creative photography.

Bob Coates is a Professional Photographer and 15-year resident of the VOC. To see more of his work check the web. Commercial - www.bcphotography.com. Photography Education -www. successful-photographer.com. Artwork - www.1-bob-coates.artistwebsites.com