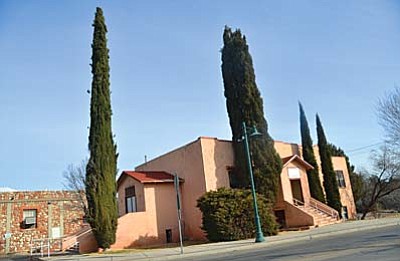 The City of Cottonwood sold its former recreation center for $150,000 and developers now intend to convert the building into a brew pub. VVN/Vyto Starinskas

COTTONWOOD -- So, what ever happened to the plan to build a restaurant and microbrewery in the long empty church building and one time parks building that stands at the Old Town Main Street corner next to the Civic Center? The city agreed one year ago to sell the building for $150,000 to four partners to allow the property to be developed.

"We are moving forward with it and hope to be going to the city in the next couple months. Plans are just about finalized," said Conlin.

Conlin, who operates Bobby D's Barbeque in Jerome, gave the Verde Independent an update on the future of the historic building.

He admits the partners initially put together their plan quickly when the city first invited a request for proposals and the initial drawing showed a plan that was a little afield of the historic character of the area.

"The Planning Commission thought the exterior design was too modern with the window exposures." But, he assures that nothing too drastic is now planned.

The city plans to have its historical commission and State Historic Preservation Office OK the plan for revitalization.

The project, he said, got off to a slow start because the escrow did not actually close until August even though the city gave approval in February.

"That change our plans substantially," he said.

It is also just a very complicated project he says.

Beside negotiations with the City, Cottonwood wanted to keep the parking lot ownership so it continued to serve all public buildings in addition to the brewpub, Conlin explained. He said the beauty of the building is the opportunity with two floors. He said he personally loves old buildings and could see the potential immediately even though many observers wondered since the structure had been poorly maintained through the years.

"We had a structural engineer inspect it and he found it is basically sound. It doesn't have a lot of hidden walls," he said.

"The basement and the garage is the nuts and bolts of the operation. When we are finished, customers will have this great dining hall experience and bar and grill upstairs, but they will also be able to go downstairs and interact see the brewery, the open kitchen, the lounge area downstairs and then it'll all open out onto the beer garden where that concrete slab where the garage doors are. There is a big sliding barn door that opens into the basement as well, so when the weather is nice, we will be able to have all those doors open and all the brewing equipment will be visible and it will really be a cool place to hang out."

The tanks are likely to come from out of state and take about 90 days for delivery, probably from the northwest, the epicenter of the craft beer industry.

The partners meet regularly to update plans. "We have all different experience but when it comes to the restaurant and beer, it's Scott and my experience and connections we have in the industry."

He says the project needs liquor licenses both for the brewing facility and for the restaurant, plus the planning department approvals.

A full restaurant will serve on the top floor. He suggested that food will probably reach the restaurant upstairs with something similar to the dumb waiter that the Haunted Hamburger uses.

Nationally, the craft beer industry was up 20 percent in the past year. He says it's a great complement to the growing wine industry. "I think we are in a really prime location," Conlin added.