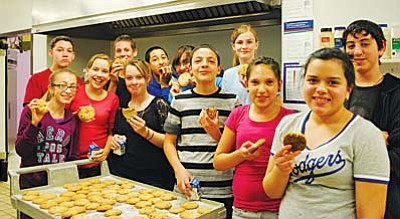 Part marketing and part education, Rogers said Sodexo has sponsored the competition for four years at its member schools.

"It's something to make it fun and show kids another way of healthy eating," Rogers said.

Rogers said the stack of submissions on her desk contains about 40 students from Mountain View Preparatory mingled with recipes from Cottonwood Elementary and Oak Creek schools.

"By getting all the recipes that we did, it shows that they were excited about it," Rogers said.

To make their recipes, all of the future chefs are meeting at MVP on March 18 from 5-6 p.m.

"We'll have everything they need," she said. "They have to prepare it, make it, and then bring it to the judge."

A panel of locally-selected community leaders will judge the dishes on factors like presentation and creativity.

"Be original, be creative, don't do recipes that are too easy or too complicated," Rogers said.

The winner of the competition gets a $500 gift basket, and a bid to the Sodexo regional competition.

"I just think it's going to be a lot of fun," she said. "It's so cool to see these young kids cooking."