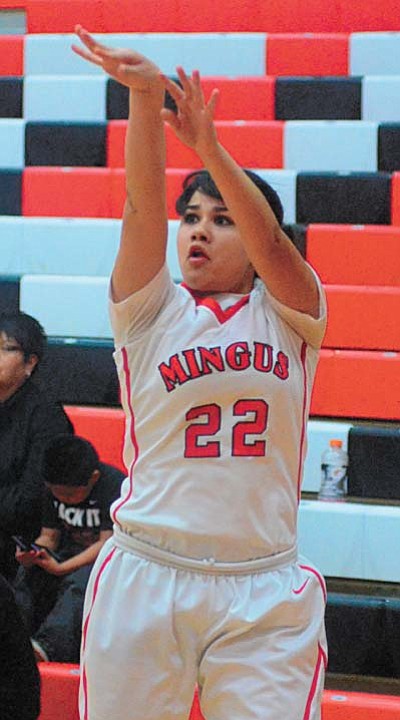 Mingus Union High School girls basketball had a tough week. The Marauders lost on Thursday at home against Coconino High School 44-26. Friday, they lost a close game 44-38 to Kingman High School at home in overtime. Mingus is now officially eliminated from the playoffs.

The loss to Kingman was close. But, it didn't start out that way. The Marauders started out the game down 15-0.

"The bad start was because of turnovers," said head coach Dave Moncibaez.

Moncibaez added his team showed character in coming back.

"But, the things is these girls fought back," he said. "I think it was one of the worst few minutes, two minutes that we've ever played. I told the girls to get back in the game. And that's what they did. They could have easily given up. We were down by so much. But, we actually got back in the game and actually got the lead a few times. We really came together as a team tonight. We played their hearts out."

The game went into overtime tied at 38-38. But, Mingus didn't score a single point in overtime. Moncibaez said the reason why the offense struggled in overtime was just simply missed shots.

"We were moving the ball," he said. "I told the girls to and be patient. Give up a good shot to get a great shot. We had chances. They just weren't going in. We missed a couple of easy ones that could have helped us out. We just couldn't get it in the hoop."

He mentioned part of his team's struggles of handling pressure from an opponent is because of inexperience.

"We're young," he said. "And it's great to experience teams that can pressure us. And I think we handled the pressure really well. Other than the first few minutes of the first quarter. We made some adjustments and we just were patient and actually took what the defense gave us. We're in the game all the way up until the end."

There is only one more week left in the Marauders season. Moncibaez said there are still things he wants his team to accomplish.

He added he sees improvements.

"On defense we were talking," Moncibaez said. "We've been communicating a lot better than we have. That's a lot of growth that we've had since the start of the year."

With the playoffs now out of reach, Moncibaez said the focus can change to keep his team motivated.

"Just going out there having fun and paying the game," he said. "Each one of these girls love to play basketball. I tell them this is one of the best times you're going to have. Not all of them if any of them are going to play at the next level. It's just that this is it. Go out there and have, play the game and just be positive. They understand that. We still want to play. We still want to compete. We want to end the season on a positive note."

With two games remaining, Moncibaez described the season like this.

"We had ups and downs," he said. "All and all, we had some really close games and some really tough teams. Kingman is a tough opponent. I think going out there, having fun and playing the game is the most important thing."

Next year things will be slightly different for the Marauders. They will drop from Division II down to Division III.