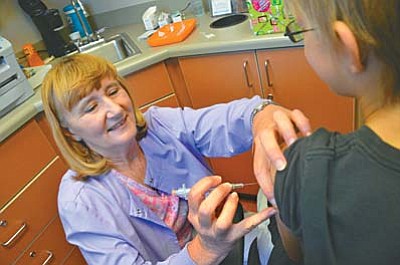 Although ensuring the health of their children is a shared goal, Verde Valley parents differ on how to accomplish this task.

Public health departments, most public school systems and a statistical majority of parents choose vaccinating children prior to attending school. On the other hand, some health professionals, many charter schools and a rising minority of parents exempt their children from school-required vaccinations.

The debate on the pros and cons of child vaccinations continues as Yavapai County students enter the school year with the lowest immunization rate in the State of Arizona.

For students enrolling in kindergarten through twelfth grade, the Arizona Department of Health Services requires proof of immunization from the following diseases: Tetanus/diphtheria/whooping cough; polio; measles/mumps/rubella: hepatitis B, chicken pox and meningococcal/meningitis (if 11 years and older).

Yet not all enrolled students are immunized.

One reason is that a student's parent may file for exemption from vaccinations. The form is available at any school. There are three allowable exemptions in Arizona: 1) Evidence of immunity, 2) medical reason or 3) personal beliefs (be it religious or otherwise).

Arizona Revised Statue 15-872 reads, in part: "Unless proof of an exemption from immunization ... is provided, a pupil who ... fails to comply with the immunization schedule ... shall be suspended from school attendance until documentary proof ... is provided to the school administrator."

Exemption rates on the rise

Statewide, the rate for personal belief exemption continues to rise. According to Arizona Department of Health Services statistics, 3.45 percent of kindergarten through sixth grade students filed for exemption from vaccinations in 2010. By 2015, the rate had risen to 4.65 percent.

Personal belief exemption rates are even higher countywide. According to the same study, Yavapai ranked last among all Arizona counties in student immunization rates last year.

Here in the Verde Valley, not all schools reported vaccination statistics to the health department in 2014-15. Of those that did, the rate of personal belief exemptions was as follows:

It is important to note that other schools may have higher unvaccinated rates than the two listed above, but failed to report them to public health agencies. Also, schools with 20 or less students report but do not release statistics, due to heavily-weighted numbers and privacy concerns. Both La Tierra and Mingus Springs schools did not return inquiries as of press time.

Vaccination on a pendulum nationwide

According to the National Conference of State Legislatures, all states grant exemptions to children for medical reasons. Most grant religious exemptions. Twenty states (including Arizona) currently allow exemptions for those who object to immunizations because of personal, moral or other beliefs. But as of 2016, California and Vermont will no longer allow philosophical exemptions, reducing the number next year to eighteen states.

A medical pro who is pro school vaccinations

Cherry Virrey is a public health nurse supervisor for disease prevention with Yavapai County Community Health Services. She worries because, to protect from school outbreaks, a 95 percent immunization rate is needed to maintain the buffer of "herd protection."

"What we've seen in the past decade-and-a-half is a decline in immunization that leaves us open to measles," said Virrey. "We've been very lucky not to have a case in this county."

"There are ramifications for teachers and for students with compromised immune systems. For pregnant woman, pertussis is very important," Virrey said. "Diseases such as meningitis can kill in a matter of twelve hours."

As for parents who have no exemption on file but neglect their child's vaccinations, "there's really not a legal ramification." Schools with low vaccination rates are contacted by her agency for coaching.

"We try connecting with those schools and informing them of the need. Teaching how to file a report and the importance of immunization in a school setting," said Virrey.

"School nurses are educators. You want information from somebody with a license and medical background that is also accountable," Vierry said.

A medical pro who is con school vaccinations

Dr. Jack Wolfson is a Scottsdale cardiologist who has made national headlines recently for his stance against child vaccinations. He replied to our inquiry, explaining his reasons.

"There are many medical reasons why a child should not be vaccinated," said Wolfson. "Unfortunately, the scientific literature is way behind what doctors are seeing in their practice. We have only scratched the surface of genetics regarding vaccine reactions."

"It seems clear that a sibling with a history a vaccine reaction should qualify for an exemption based on similar DNA, environment, and nutrition," Wolfson said.

"We have no idea what 69 doses of 16 vaccines does to a child. Zero is the number of randomized, placebo controlled vaccine trials," said Wolfson.

"The point that is often missed in the vaccine debate is the fact that exposure to virus and bacteria is good for our immune system. It may be protective in the long run. We know girls who contract the mumps virus have a lower risk of ovarian cancer," Wolfson said.

"Our school age children are our best representation of our community as a whole. We want parents to make informed decision," said Vierrey. "Our children are not an experiment," said Wolfson. "We have an immune system for a reason. Keep it strong with organic, Paleo foods and avoidance of toxic chemicals."