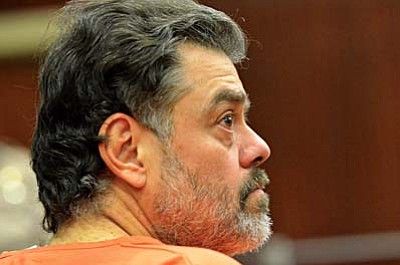 Peter Gaver, father of the family charged in the March 21 brawl and shooting at the Cottonwood Walmart, was arraigned for a second time Friday morning. VVN photo by Vyto Starinskas

CAMP VERDE -- Peter Gaver, father of the family charged in the March 21 brawl and shooting at the Cottonwood Walmart, was arraigned for a second time Friday morning.

The hearing was on the new charges brought against Peter since the case was remanded back to the Grand Jury.

The new charges are the same as the original ones, resisting arrest and hindering prosecution, and defense attorney Glen Hammond waived their readings and entered a not-guilty plea on both.

The balance of the case management conference Friday focused on three motions.

One motion would require that the hard drives be removed and examined on the dash cameras for Cottonwood Police Units 111 and 96. Another motion requests that the case be considered a "complex" case. That would allow up to 270 days instead of 150 days to complete

Hammond said he wants the examination "on the side of caution."

But Judge Butner called the filing "bare bones" and denied the motion until there is stronger evidence of the need for an examination.

Already attorneys for Ruth Gaver and son Jeremiah have asked for preliminary mental health exam for their clients.

There have been rulings already on the two juvenile Gaver children.