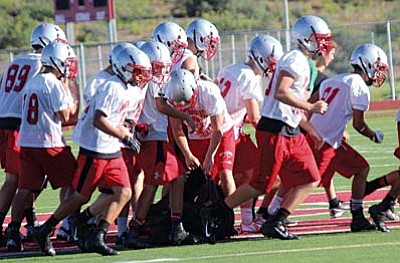 Mingus football started their season Monday night opening up their first regular season practice. The Marauders will start their season on August 21 against Cactus Shadows at home. VVN photo by Greg Macafee.

COTTONWOOD - After back-to-back 5-5 seasons and missing the playoffs the past two years, Head Coach Bob Young and the Mingus High Marauders football team look to improve and return to the playoffs in their 2015 campaign. Following a summer filled with 20 practices, 56 7-on-7 games and eight practices in their annual trip to California, the Marauders are looking to get better every day.

"Our main expectation is to get better every day, and get better daily," Young said. "We were 5-5 the last two seasons, were not used to that, were used to making the playoffs, and the last two years we haven't so we are working hard to get better."

Coach Young definitely sees his defense as a strength going into the season as the Marauders are returning most of their defensive starters from the 2014 campaign and starting quarterback Jordan Upham is returning to the mix as well to lead the Marauders offensive attack.

"We have 8 of 11 defensive starters returning, so that's definitely a strength and we have our quarterback returning as well, so we have got some pieces coming back we just have to fill around them." Young said.

With trying to fill pieces in around his returners, Coach Young said the depth of the Marauders might be a weakness going into the season, but at a smaller school like Mingus, with around 1200 students, lack of depth is something that will occur on a yearly basis.

"At a smaller school, we don't have a lot of depth so we are trying to develop some guys, because you know you will have injuries and other things like that throughout the season." Young said.

Going into the first practice of the season, the Marauders are made up of 13 seniors, 14 or 15 juniors and eight or nine sophomores, and the freshman team, which will be made up of close to 30 freshman, went undefeated in middle school last year. After going undefeated last year, Coach Young said the expectations of the freshman team are pretty high going into the season.

Mingus will start off their official practices with three days of just helmets for the players and finish off the week, on Thursday, Friday, and Saturday in full pads. Coach Young said the team will move to full bore at the start of next week.

After an offseason of practices, workouts, and 7-on-7's, Coach Young said jobs are on the line to become starters for their first game come August 21 against Cactus Shadows.

"I tell them every day jobs are on the line and obviously the guys coming back we expect them to be a big part of it. Every day is a battle with these guys they are trying to get on the field somewhere, so they are out here competing every day." Young said.

Young added that the seniors on the team have been great leaders this offseason and it is something he hopes that they can carry throughout the season. With the hard work of the offseason behind them Coach Young thinks they should be ready to go come August 21.

"We've done it every year and we work hard every offseason, we should be ready to go come Aug 21. Cactus Shadows that's our first game that's the one were working towards."

The Marauders will hold their annual Red and Grey scrimmage on August 7 at 7 p.m. before opening their 2015 campaign at home for three straight games, the first coming against Cactus Shadows, followed by the Lee Williams Volunteers and the Peoria Panthers.