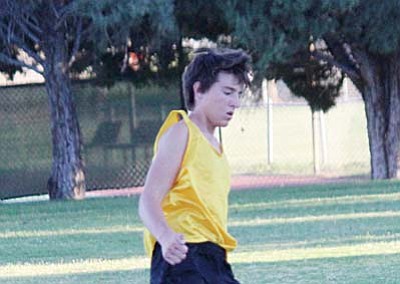 Darren Franklin is one captain that Coach Dave Miller will look to for leadership in the upcoming season. VVN photo by Greg Macafee.

CAMP VERDE - After closing out their 2014 season by winning five of their last 6 games, Camp Verde Soccer Coach Dave Miller, hopes the team can start off hot in their 2015 campaign, after starting off slow start last year. With no seniors on the team, so far, the Camp Verde Soccer Cowboys will be made up of 12 juniors, 13 sophomores, and six freshman.

In the offseason the team has met two or three times a week, along with playing in a summer league against other teams in the area. Miller thinks that the hard work his boys have put in this offseason will pay off when the season comes around.

"I think the offseason work has made tremendous difference already, we have dedicated the last 48 weeks of the year to make sure we touch base with the boys at least two or three times a week this summer," Miller said. "The comradery between the boys is up and they understand each other's games and they lend to it. Plus their skill level is up this year so it's been good."

Last year, the Cowboys started off slow by losing a majority of their games, but won five out of six to close out their season.

Miller said the boys matured towards the end of the season and he could really see the talent and strength coming out and developing in his team.

"Last year, we took a while to develop, and we gained our momentum at the end. We lost a couple of early season games, we matured at the end and won 5 out of 6 games and really set the tone for this year. By the time the season was over we had nearly a full season under our belt and you could see the talent coming out, they started becoming stronger," Miller said.

The difference from last year to this year will be the maturity level for the Cowboys. Miller said his young team are already way ahead of where they were last year at this time.

"They have been able to mature physically, as well as skill wise," Miller said. "The physical maturity will be the big difference I think though, we are 4 inches taller and 20 pounds heavier than we were at this time last year. We were all freshman and sophomores last year and this year we are juniors and sophomores, so they are all bigger faster and stronger than they were before."

Even though practices do not start until August 10, Miller said his captains have already been rounding up the team for early morning conditioning and they still plan on meeting before the season starts to keep working hard.

With no seniors on the team, Miller said it is hard to choose one or two players who he thinks will lead this year because there are so many on the team that could fill that role.

"I don't want to seem non-committal but I have so many, I don't think I can just single out one person. That is sort of the way the team has developed," Miller said. "We have developed more into a team rather than a team playing around one superstar. The average level of experience on our team is really good. We are just going to be strong as a group. We are going to be a strong team rather than playing to one or two players."

With a strong young team, Miller said they are looking forward to every game with one goal in mind, State Champions.

With teams like Chino Valley, who are the two-time defending state champions, and Payson on their schedule Miller believes they will have plenty of chances throughout the season to figure out where they are at as a team.

"State Champions that's our expectation. We will strive to start the season shooting for the top and as long as we leave it on the field whether we win them all or not, that's all we want and all we expect as coaches from these boys and I think that's all they really should expect from themselves," Miller said.

Coach Miller added that they expect to start fast this year and win a couple of close games and win the games that got away from them last year.

To start off their season the Cowboys will play in the Chino Cup Invitational on September 4, followed by a face-off against Payson on September 9. They will then open a two game home stand against Northland Prep on September 15 and Lourdes Catholic on September 19.