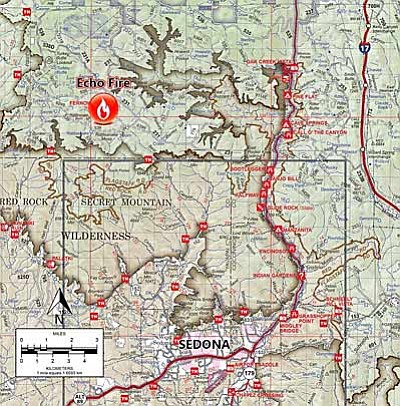 NORTHERN ARIZONA -- Smoke haze has been settling in the Verde Valley in recent mornings, shed from two lightning-ignited fires above the Mogollon Rim.

Fire managers on the Coconino are utilizing the Echo Fire near Turkey Butte to achieve multiple objectives. The Echo fire is burning at a low intensity, consuming dead forest branches, logs, leaves and pine needles. It may become more active throughout the next week and grow in size, as it will be managed by the Forest Service to allow the fire to fulfill its natural role in the ecosystem.

"This is an important piece of ground that ties in with the old Taylor fire of 2009 and last year's Slide fire, as it will provide added protection for Flagstaff should a fire establish itself to the south in Secret Canyon," according to Don Muise, fire staff officer for the Coconino National Forest.

Fire managers planned to conduct burnout operations this week if weather conditions permit. The fire may produce some noticeable smoke to surrounding communities such as Oak Creek, Sedona, Verde Valley and Flagstaff.

Smoke from the wildfire is expected to travel in a northeast direction during the day and could impact Flagstaff and Doney Park. But, during the evening hours, smoke draining off from the fire could cloud areas of Oak Creek and Sedona and the Verde.

Additionally, as the Springs Fire about18 miles to the northwest on the Kaibab Forest has moved to the north and east, smoke from that fire combined with smoke from the Echo Fire created greater smoke impacts than anticipated. Fire managers are adjusting planned ignition schedules to allow smoke to disperse earlier in the day with the goal of reducing smoke impacts on neighboring communities.