Camp Verde girls soccer looking to return to where their season ended last year....and then some. 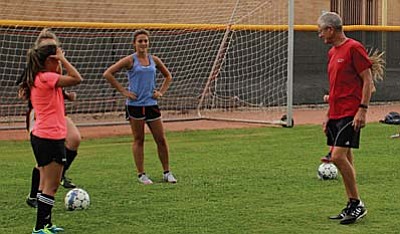 The Camp Verde girls soccer team has been getting back onto the field with two-a-days this week after a three day mini-camp last week. The Lady Cowboys start off their season on September 2 against Holbrook. VVN Photo by Greg Macafee

CAMP VERDE - Camp Verde Girls Soccer ended their season last year by losing to the eventual State Champions Blueridge in the state tournament. Losing seven seniors though doesn't seem like it will affect the Lady Cowboys too much as Head Coach Pat Allen looks to return his team back to the state tournament.

With tryouts a little over a week away the Lady Cowboys have already started getting back to work to return to where they ended last year, and then some.

The girls have been working out all offseason and recently held a three day mini-camp the week of July 20 to start getting their touch back.

"We had a short 3 day camp last week, and I saw a lot of really good soccer," Allen said. "We have been going two times a day this week. We get out here at 6 a.m. for running and conditioning...mainly running though, and then we come back out at 6 p.m. to get some drill work in. I think we have a great bunch of girls so far, a well-rounded bunch, real pleasant to work with and I think we will have a lot of skill going into the season."

With official practices not starting until the 10th of August, Allen thinks that his team will consist of 3 seniors, 4 juniors, 4 or 5 sophomores, and 5 or 6 freshman but he will be able to get a better picture once official practices start on the 10th.

Allen said the first two weeks of practice will be tryouts and the team will go from there.

With such a young team, Allen believes that three of his seniors will step up to the plate to lead the team in the right direction.

"Lucy Showers will probably lead our defense, Cheyanne Reece is another senior who has really stepped it up, and Paige Church is our third senior who will probably take a lead but all of our seniors will be leaders this season. Raiven Alvey is an underclassmen who might add to that group as well." Allen said.

Going into the season Allen thinks that his team will take advantage of their speed this season as they have a couple girls who are "tremendously fast," Allen said.

Allen included another strength of his team is their ability to communicate as a team and he thinks that will help them a lot as the season goes along.

"We have really good speed, we have a couple girls who are tremendously fast," Allen said. "Ball control is another strength, the girls play really well together, they talk well on the field and off, and they are all good friends. It's going to be a good season. I think the team will come together real nice."

The Lady Cowboys look to take the season game by game, but Allen said they do have a couple of games on the schedule that they look forward too, to see how they match up against other teams.

"We want to take it game by game, we would always love to win them all but we have a pretty good schedule and then its gets a little more difficult," Allen said.

Camp Verde heads to Desert Christian on September 12, and Allen believes that this game will be a good game to measure how his team is doing.

"Desert Christian always brings a good team," Allen said. "We are going down their first, they always have a good team and I think if we can stand up with them were doing really well."

The Lady Cowboys open their season on the road against Holbrook on September 2 before heading to a tournament in Show Low. They will have their first home game against Payson on September 9 at 6 p.m.