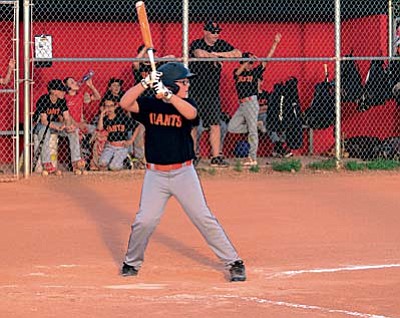 Verde Valley Giants' player Josh Schlegel gets ready for an bat during Monday's 7-6 win for the Rangers. The Giants are now headed to the Tournament of Champions. VVN/Derek Evans

COTTONWOOD -- On Monday, the Verde Valley Little League Majors Giants beat the Rangers 7-6 at Riverfront Park. The Giants have now won the league and will play in the Tournament of Champions.

The game was close from the start. The Rangers scored in the top of the first from a RBI double with two outs by Treyson Peters. Both were then shutout in the second.

In the third inning, both teams scored twice and the game was tied three going into the fourth. The Rangers runs came on an RBI double by Zachary Harrison, which scored Drew Meyer. But the lead wouldn't last.

The Giants scored four runs in the bottom of the fourth and took a 7-4 lead.

But the Rangers weren't done. They answered back with two in the top of the fifth to cut the deficit to 7-6.

The Rangers then held the Giants scoreless in the bottom of the fifth and it remained a one-run game going into the sixth inning.

With one out in the sixth, Rafael Quintero got a single for the Rangers. With two outs, he reached third base on a throwing error.

Then Giants relief pitcher Tanner Lynch got a strikeout to end the game and the Giants won.

Tanner was also a force at the plate in the game. He went 2-for-2 with a double and a single.

After the game, Giants head coach Jeff Lynch said his team "did the little things," to win.

"We played great defense," Lynch said. "We hit the ball well, had some great pitching."

Lynch said it was a good, hard fought game between the teams.

"It was a great game," he said. "It's everything you can expect out of a championship game. Both teams fought hard, played hard. Our team came out on top. These kids have practiced hard, worked hard all season. They deserve to be here."

Lynch said his team didn't panic when it feel behind at the start.

"Just chip away," he said. "We've been done before. We know we can work from behind. Just work on getting one run at a time."

This was the third time the Giants have played the Rangers this year. The previous two times the teams played, the games were split.

"The Rangers are a great team," Lynch said. "They're very well coached."

The Giants have only lost two games all season. Once to the Rangers and once to the Camp Verde Little League Angels.

Lynch said the success of his team starts from his players.

"I have a great group of kids," he said.

Lynch said his team made a lot of improvement.

"We didn't start the year all with the best talent. These kids got better and better as the season went on. I was happy to coach each and every one of them."

Lynch said he wants to congratulate the Rangers on a great season.

The Giants will start the Tournament of Champions at Riverfront Park against the Camp Verde Angels on Friday at 7:30 p.m.

After the game, Rangers head coach Jeremy Peters said it was hard knowing it was the last game he'll ever coach with his team.

"Just trying to get through the thought of finishing with these guys," Peters said. "I enjoyed coaching them. I would have loved to coach a few more games with them."

He added the Giants deserve credit.

"Hats off to the Giants," he said. "They made the plays they had to. They hit the ball well. We just came up on the short end tonight. That's the way baseball goes. It could have gone either way. I think the Giants will represent our league well in TOC."

Peters said he had a message for his team following the loss.

"We just told them you're going to have ups and downs," he said. "Life has ups and downs, but you can't let the downs define you. You need to get up. Need to keep your head up and your chin up and keep going for it. It's a tough one," he said.

Peters added his team gave it its all.

" We left it on the field. Both teams did. I think there was a lot of emotion at that last out. Just encourage them to keep going."

Both Lynch and Peters will coach the Little League All-Stars in July.