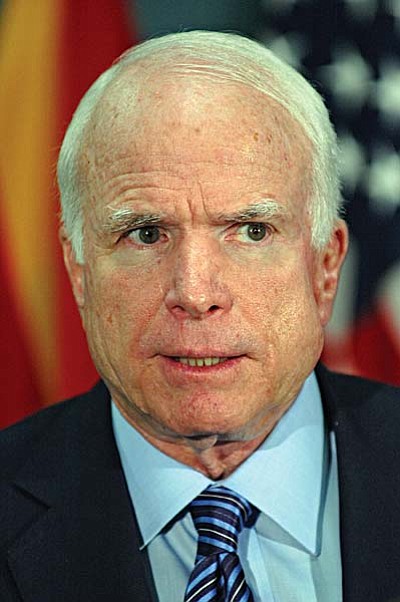 PHOENIX -- A new poll suggests Arizonans are feeling a bit more positive toward the state's senior senator as he asks for another six years in Washington.

The survey by the Behavior Research Center finds 30 percent those interviewed in late April and early May think John McCain is doing an excellent or good job. That is up slightly from a year ago when his positives were at just 27 percent.

Conversely, those who rate his job performance as poor or very poor went from 31 percent last year to 26 percent now.

But McCain may have his work cut out for him to convince voters to reelect him.

First, he has to survive a Republican primary, with state Sen. Kelli Ward, R-Lake Havasu City, making noises about wanting to try to oust him.

At this point, though, it would appear that McCain is likely to rebuff her and any other Republican hoping to deny him a seventh term in the Senate. Half of Republicans questioned like the job he is doing, with another quarter rating his performance as at least fair.

Just 19 percent of Democrats give the senator top ratings, against 36 percent who say the job he is doing is poor to very poor. And that was even before U.S. Rep. Ann Kirkpatrick announced she is definitely going to challenge McCain -- or whoever wins the GOP primary -- in 2016.

It is McCain's support among independents, who make up more than the number of either Republicans or Democrats, that could make him vulnerable. Pollster Earl de Berge found his negative numbers among them to be even higher than among Democrats.

It wasn't always this way for McCain.

Shortly after the 2001 terrorist attacks he pulled as high as 70 percent among those who rated his performance as excellent or good. And he even beat that mid-decade as he was preparing for his ill-fated 2008 presidential bid.

The survey was of 701 adult heads of household including 457 registered voters. It has a margin of error of 4.7 percent.