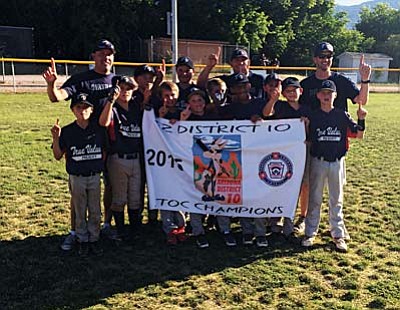 The team lost to the Prescott Little League True Value Dirtbags 11-5 in the Arizona District 10 semifinals.

But, not all went bad for the Giants on Saturday. Earlier, they beat the Camp Verde Little League Angels 5-2 in seven innings.

The game was a carryover from Friday which was delayed twice by weather.

The Giants trailed the Angels 1-0 when played resumed on Saturday. It was in the top of the third inning with the Giants at bat with a runner on first and two outs. Tanner Lynch then delivered an RBI single to tie the game at 1.

After both teams scored one more run, the game headed into extras tied at 2.

After the Giants scored the first run, they scored two more from a two-run RBI double by Garret Hagstrom.

Then the held off the Angels in the bottom of the seventh for the win.

The team had about four hours off in between games. Head coach Jeff Lynch said his team needed to focus during the time off.

"I'm just going to tell these guys to relax and hydrate," Lynch said.

The Giants played the Angels three times and beat them twice. Those were the only two games the Angels lost all year.

"We practice hard hitting, fast pitching and multiple pitches," Lynch said. "It seems to get it done."

Lynch said he thought there wasn't much of an affect from playing a game the day after it started. He said the field was just too bad to finish on Friday.

"It was a bad weather night," he said. "It was a wet and soggy field, I think that was a playing factor in the kids last night. It's nice to have a fresh field everything today."

The game against the Prescott True Value Dirtbags didn't go according to plan for the Giants. The Dirtbags got ahead 4-0, in the first inning. But, the Giants didn't quite. They answered with two runs to cut the lead to 4-2.

The Giants still weren't done coming back. They gained a 6-5 lead in the fourth inning. But then it was Prescott's turn to respond.

The Dirtbags scored three runs in the fifth and three and the sixth to go up 11-6. The Dirtbags then held the Giants scoreless in their half the inning.

Following the loss, Lynch said it was simple how his team couldn't get it done.

"We just ran into a good team tonight and we made too many errors," he said. "We made more errors than they did. When you play a good team, you can't make errors."

Lynch added his team didn't get too confident once it gained the 6-5 lead.

"Definitely not," he said. "They were constantly trying to chip away and just made a few too many errors. "

The Giants finished a successful season.

The team only lost three games, those were to the Camp Verde Angles, the Verde Valley Rangers and the Prescott True Value Dirtbags.

Lynch said his team needs to think about the bigger picture rather than think about one game.

"It's tough," he said. "They need to just realize what they have done and realize in life you have to face obstacles. You can't win them all. I'm really proud of them, they have a lot of heart."

Lynch added there were many improvements he saw over the course of the season.

"Every area we improved in," he said. "Hitting, defensively, pitching, our team grew a lot this year. It was fun."

Ryan Lindsay was the top pitcher for the Giants this year. Ryan didn't have his best outing against Prescott.

"Just help him realize not everybody has good games every time," Lynch said. "Everybody has a bad outing. Just shake it off and move on."

Lynch said he thinks his team will be strong again next year.

"We're hoping to do really well again in the league next year," he said.

In addition to Giants coach, Lynch is also the vice president of Verde Valley Little League. Lynch said it was a strong year for the league as a whole from all levels.

"I think it was a good season," he said. "We had good competition at every level and that's what we strive for. Good competition usually provides good opportunity for improvement."

The Dirtbags beat the Chino Valley Little League All Star Sports 15-5 in five innings in the championship game. The game was played at Riverfront Park in Cottonwood.

The Dirtbags got to the Championship game by beating the Sedona Little League Diamondbacks 15-11 in the quarterfinals.

Then on Saturday, they beat the Verde Valley Little League (Cottonwood) Giants 11-5 in the semifinals.

The game didn't start out well for Prescott. It trailed the Chino Valley All Star Sports 4-0 going into the bottom of the first inning.

The Dirtbags then scored two in the first. Then three, in the second and then two more in the third. They then, four each in the fourth and fifth.

Chino Valley's offense was four in the first inning and one in the fourth.

After the win, True Value Dirtbags' head coach Dan Streeter said his team knows how to come from behind.

The Dirtbags starting pitcher was Cade Buettner. This was the first time Buettner had pitched all season. Streeter said it's never ideal to start a pitcher in a championship who had never pitched in the season.

"There were three kids who we need we could choose from who hadn't thrown a lot this year," he said. "These guys have answered the bell all year long."

Streeter said after the first inning he thinks his team adapted to the Chino Valley hitters.

"I think it was just kids settling in," he said. "I think our starting pitcher settled in. Our defense also settled in. We responded, made our plays when we needed to."

In Little League, the Majors level is generally for kids 10-12 years old. On the Dirtbags, half the team are 10-year-olds and half are 12-year-olds. There are no 11-year-olds on the team.

Streeter said it was a great year all around for his team.

"We had a conversation at the start of the year that it's not the size of the dog in the fight, it's the size of the fight in the dog," he said. "The little guys stepped up all year. We made a run through our city tournament where we all three games in a row. All in games which we came from behind."

The Chino Valley All Star Sports entered the game undefeated on the season. The starting pitcher was Dante DeBono. Despite the loss in the championship game, head coach Stewart Robertson said it was still a great season.

"The kids just dedicated everything they had," Robertson said. "They kids played hard, they came out and they wanted to win."

Robertson said Prescott's pitching was much better after his team jumped out to the 4-0 lead.

"They got some good pitches in there," he said. "It's not lack of effort."

Before Sunday's game, Chino Valley had beat Dewey-Humboldt 10-8 in the semifinals. Before that, they beat Prescott Valley 15-1 in four innings.All Star Sports had a chance to make some damage in the third inning. The team had bases loaded with one out, but wasn't able to drive in any runs.

"We just couldn't get the stick on it," Robertson said.
Report a Typo Contact
Sign up for our e-News Alerts
Most Read
7 days
30 days