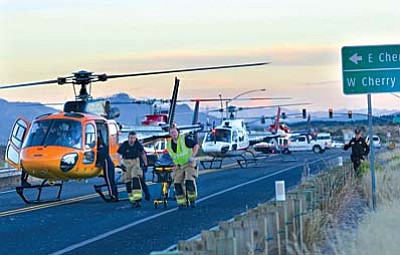 On Nov. 21, 2014 five medical helicopters and numerous ground ambulances were needed to transport all the patients to hospitals in Flagstaff, Phoenix and Cottonwood. (Photo by VVN/Vyto Starinskas)

CAMP VERDE -- Just after 4 p.m. last Nov. 21, a pickup truck and a mini-van collided on State Route 260 near the Yavapai Justice Facility. Police found that a white GMC pickup truck crossed the center line and struck a minivan head-on in its eastbound lane.

The minivan carried three adults and five juveniles. Only the driver occupied the pickup. Everyone was hurt, some seriously. Five medical helicopters and numerous ground ambulances were needed to transport all the patients to hospitals in Flagstaff, Phoenix and Cottonwood. Numerous officers from Camp Verde, DPS, ADOT and the Yavapai Tribal Police coordinated traffic. The accident cleanup and investigation closed the highway for several hours.

Jeremy Hutchinson and Sabrina Champ and five children were in the minivan. Seth Collins drove the pickup truck.

The Camp Verde Marshal's Office reported that Champ's unborn child at the time of the accident eventually died of its injuries in January.

Collins was initially arrested in February after the receipt of a lab test identified numerous drugs in his blood including methamphetamine and diazepam. Police also seized 9 grams of methamphetamine at the time of his arrest and he is still facing a paraphernalia charge.

In April, Collins, while in jail, was charged with promoting prison contraband. He continues to defend a paraphernalia charge in that case.

Now, seven months later, Seth Collins has been indicted on 23 more counts stemming from the November accident. Collins was indicted Friday, June 12, and arraigned Monday, when he pleaded "not guilty" to the 23 new charges.

Monday, Collins attorney, Matt Springer, who had just received a copy of the indictment, asked for 30 days to review it. A case management conference was scheduled Monday, July 13, in Superior Court Judge Michael Bluff's courtroom.