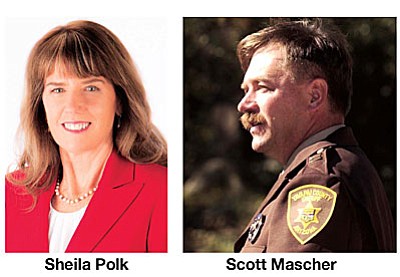 PRESCOTT -- Yavapai County Sheriff Scott Mascher and County Attorney Sheila Polk have announced that they will both seek re-election in 2016 in a joint press release.

Polk, serving her fourth term, is the first woman to hold the County Attorney job.

"I am as passionate today about the quality of life for Yavapai County residents as the day I first took office in 2001," she said. "Public safety and a low crime rate are key to that high quality of life that we all enjoy."

Polk said she has overseen the successful prosecution of nearly 2000 felony cases and numerous juvenile matters.

The co-chair of the MATFORCE substance abuse coalition, founded in response to the methamphetamine scourge in the mid-2000s, Polk takes a hard line on drug abuse and opposes legalization of marijuana, which will also appear on the 2016 ballot.

Mascher, who took over upon the retirement of Sheriff Steve Waugh in June 2011, is running for his second full term. He began his career as a YCSO reserve deputy in 1983.

"Yavapai County is a great place to live," he said. "I am responsible to ensure our public safety and to maintain a standard of life that we all can enjoy."