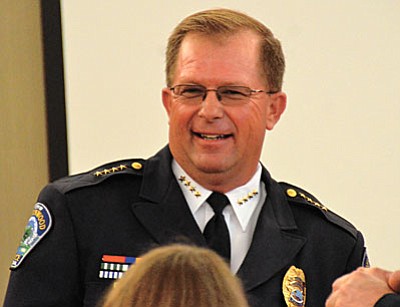 COTTONWOOD -- Cottonwood Police Chief Jody Fanning has informed City Manager Doug Bartosh that he will retire from law enforcement on Jan. 22, 2016. Fanning will have served the citizens of Cottonwood for almost 30 years on his retirement date with almost eight of those years as the police chief.

Chief Fanning got his start in law enforcement through the Flagstaff Police Department, which sent him to the Arizona Law Enforcement Training Academy in December 1986 and he began working with the Cottonwood Police Department the following year, May 5, 1987.

He was promoted to Patrol Corporal in July 1991 and was also awarded the City of Cottonwood and the Jerome Elks Police Officer of the year in 1991.

He served as a Field Training Officer from 1989 to 1999, training many young officers who have gone on to have successful careers in law enforcement.

Chief Fanning was appointed as the Cottonwood Police Chief in June of 2008.

During his tenure as Chief, he was elected by his peers to serve on the Arizona FBI National Academy Executive Board and was appointed as president of the board in 2013.

Chief Fanning was appointed by Governor Janet Brewer to the Western Regional Advisory Council for Homeland Security as well as the Executive Board of the Arizona Counter Terrorism Information Center. Additionally, he is a graduate of Project CENTRL for Rural Leadership through the University of Arizona.

"We have ultimately become one of the premier law enforcement agencies in the state and are a highly respected department," said Fanning. "I attribute that to the guys working with me that had the same vision to become the most professional we possibly can. The other biggest thing is the community support that the police department enjoys and that comes from the fact that our police officers are invested in their city. That is huge to me."

"We have a very good working relationship with all the police departments in the county, probably the best I've seen in my 30 years here. They all get along and are very cooperative. It is a great working environment."

City Manager Bartosh said, "Chief Fanning will be greatly missed. He has taken the police department to the next step in terms of professionalism, training and equipment. I most appreciate his and his family's dedication to the Cottonwood community as demonstrated through their numerous volunteer efforts throughout the years."

Chief Fanning was involved in the initial investigation of the Marisol Gonzales case in which he never lost interest and led his department to an eventual prosecution of the suspect in the case.

His recent management and transparency involving the Walmart incident and investigation has served as an excellent example to other law enforcement leaders across the Nation and has resulted in Chief Fanning receiving the FBI National Academy's Livio A. Beccaccio Memorial Award for Law Enforcement Leadership, and he is the first Police Officer to receive this award in the State of Arizona.

"Chief Fanning has does an excellent job for the citizens of Cottonwood and his leadership will be difficult to replace. I hope he continues to live and contribute to our community as he has done throughout his career," said Mayor Diane Joens.

"We have no plans to move, but we are going to enjoy life a little more," said Fanning. "My wife is going to continue working. She has a couple more years until she can retire. That's one of the reasons I plan to go back to work. I can only do so much around the house."

The replacement process for the police chief position is being planned with the intent of filling the position by the end of 2015. Fanning says there is certainly opportunity for promotion from within the department.