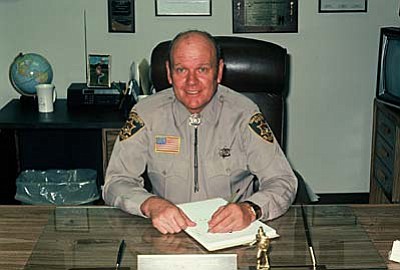 Moore was born in Kansas and grew up in the Phoenix area following a move from Colorado. Even from his early days he always had an interest in law enforcement. He eventually joined the Highway Patrol (Arizona Department of Public Safety) in 1951 and held various assignments in the areas of Patrol, Liaison to the Arizona State Senate, and Executive Aide to then Governor Paul Fannin. Moore would go on to serve 22 and ½ years attaining the rank of Sergeant. Moore took a break from his work at the Highway Patrol when he left the agency in a move to Alaska where he became a police officer with the Fairbanks Police Department. After about three years, Moore returned to Arizona and the Highway Patrol to finish his tenure retiring in 1975.

He moved to Yavapai County where several friends of his convinced him to run for Sheriff of Yavapai County. He was elected in the November 1976 general election and sworn in as Sheriff on January 1, 1977.

Moore was instrumental in the design and groundbreaking of the current Criminal Justice Building and Detention Center on Gurley Street in Prescott. Opened in late 1980, the building housed the Yavapai County Sheriff's Office Headquarters, County Jail, Board of Supervisors, County Treasurer, and the Adult Probation Department. Prior to 1980 the Sheriff's Office, Jail, Supervisors, Courts, and County Departments were based in the County Court House. Moore also brought forth a comprehensive pension plan for deputy sheriffs and detention officers for the first time placing them in the still existing state level Public Safety Retirement System. The prior county retirement system had little to no benefits. As Sheriff, Moore saw the county population increase from about 60,000 to over 100,000 during his administration.

Sheriff Moore was voted Sheriff of the Year by the Arizona County Attorney's and Sheriff's Association.

Several historically significant cases that were investigated during his Administration include the 1977 Yarnell bank robbery and hostage incident, the 1977 Poland brothers armored truck robbery and homicides, the Cathy Sposito homicide in 1987, and the Pamela Pitts Homicide in 1988.

In November 1988, Sheriff Moore lost in the general election to former Prescott Police Department Lieutenant G.C. "Buck" Buchanan. Following his retirement as Sheriff on December 31, 1988, Moore was appointed by Governor Rose Mofford (R-AZ) to the Arizona Liquor Board as a Judge-Hearing officer and served in that capacity until 1990 when Moore retired from public service after almost 40 years.