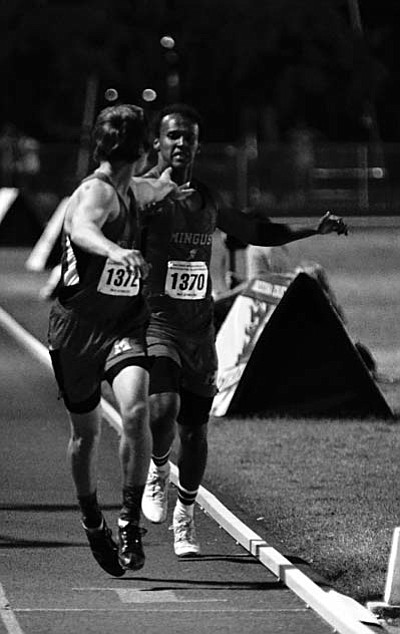 Senior Javin Helsel finished the 100 meters 11:84 seconds. Helsel was also part of the 400 meter relay that finished with a time of 46.32

PHOENIX - As far as Sedona-Red Rock and Mingus Union high school track and field goes, there were two safe bets going into the 2015 season.

One was that Mingus would have one of the best 1-2 punches in the state in the distance events with senior Jordan Bramblett and junior Joseph Sandoval.

The other was that Sedona-Red Rock senior Andre Davis would rank among the state's elite in both hurdle events.

Now, after last week's season-opening Rattler Booster Invitational at North Canyon High School, those might be considered sure bets.

Both Mingus and Sedona-Red Rock are Division III schools, but Davis, Bramblett and Sandoval all showed they match up equally well on the Division I stage.

In the hurdle events, Davis turned in third- and second-place finishes, respectively, in the 110- and 300-meter hurdle events. In the latter, he clocked in with a sizzling 40.15-second performance to finish behind Brophy Prep's Isaiah Oliver, who turned in the ninth fastest time in state history. Earlier, Davis finished third in the high hurdles in 15.16 seconds.

Both times rank him first in the state among Division III athletes.

In addition, Mingus saw top performances from sophomore Wayne Galloway in the discus with a throw of 133-10. Sedona-Red Rock high jumper Dawson Stevenson finished second with a jump of 60 feet while Mingus' Evan Snyder was third at 5-10.