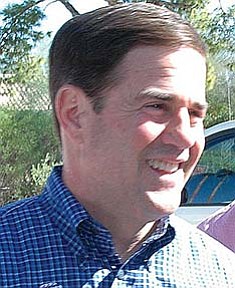 PHOENIX -- Gov. Doug Ducey said Thursday he intends to approve legislation cutting millions more in taxes even as he signed a budget that cuts millions of dollars from education and social programs.

"We're going to index the income tax to inflation,' Ducey said ahead of signing a new $9.1 billion spending plan which includes close to $500 million in cuts to existing programs. While the overall amount of the budget remains level, it adds funding for more prison beds even as it takes $99 million from the universities.

And the amount of increase in state aid to public schools is less than Democrats figure schools would normally get just to account for increased student growth and inflation.

But the governor said he remains convinced that further tax cuts are a good thing now that he says the budget is balanced.

"We're going to continue to look in future session at how to improve our tax situation,' he said.

"I want Arizona to be the best state in the country to work and do business,' Ducey continued. "And the tax burden is part of that.'

Those cuts won't wait until next year, though. Ducey said Thursday he intends to keep the promise, made in his State of the State speech, to sign HB 2001.

It requires the Department of Revenue to annually adjust tax personal income tax brackets to account for inflation. Rep. Justin Olson, R-Mesa, said the move will ensure that taxpayers are not financially penalized simply because they got a pay hike to match inflation.

The difference to any one taxpayer might not be much. Legislative analysts figure that someone right at that line who gets a $100 raise might end up paying perhaps an extra dollar a year.

But the cost to the state is another matter. Gov. Jan Brewer vetoed an identical measure last year because of the price tag -- and the fact that the loss of dollars would increase automatically every year.

Budget analysts figure the legislation would cut state revenues for the coming budget year by $6 million. But that rises to $15.4 million the following year and $24.7 million the year after that, with higher figures the further out one goes.

Ducey said signing this legislation is in line with a pledge he made during the campaign to reduce income taxes.

"And we're going to keep that pledge,' he said. Anyway, Ducey said the budget just approved by the Legislature built in the loss of revenues.

The governor also boasted about the budget being a bipartisan effort even though the number of Republicans opposed exceeded the one Senate Democrat -- Carlyle Begay of Ganado -- he got to vote for the package. And that only occurred after GOP leaders added several provisions solely to benefit the Navajo Nation, including $1.2 million in new road funds and up to $160,000 for tribal community colleges.

"There are needs outside of Maricopa County, including on the Navajo Reservation and the Navajo Nation,' the governor said. And he denied this amounts to putting "earmarks' in the budget to buy votes.

"A budget demonstrates the priorities of a state,' he said. "This budget reflects that.'

He said that is evidenced by a $102 million increase in K-12 spending, a figure he said is the highest level ever.

In fact, though, state aid actually was higher in 2008. But Ducey instead is relying on all sources of dollars, including locally raised taxes and federal aid, some of which has restrictions on how it can be funded.

"We protected K-12 education in a difficult budget setting,' he said. `And as hard as the budget was, we're proud of that accomplishment.'

The universities are another story entirely, with the $99 million cut taking state aid to below $670 million. That compares with more than $1 billion in 2008.

And the final budget eliminates all state aid to Pima and Maricopa community colleges.

Anyway, the governor said, it's not like the state's fiscal situation is his fault.

"I've been in office for less than three months,' he said.

"I have to deal with the financial numbers I've been dealt,' Ducey said. "I said I wanted to handle this at the speed of business and make the difficult decisions now but protect the most vulnerable, protect K-12 education. This budget reflects that.'

He said that includes the Department of Child Safety which is getting "more money than there was last year.'

The legislative analysis of the final budget actually shows a $4 million drop. But gubernatorial press aide Daniel Scarpinato said that's because the current year includes some one-time funds to set up the new agency, money that won't be necessary this coming year.

The budget also was balanced by cutting what the state's Medicaid program pays to providers by 5 percent. While that would save the state $80 million over the next two year, Sen. Steve Farley, D-Tucson, figures that not only hurt hospitals but also would mean the loss of hundreds of millions of dollars of matching federal funds.

And lawmakers voted to put a one-year lifetime benefit on Temporary Assistance for Needy Families. which aids parents or caregivers with children, with benefits for a family of three of $277 a month. That is half as long as current law.

Ducey's claim the budget is structurally balanced -- meaning income at least matches expenses -- also is in dispute. Even the legislative budget staff figures spending in the new budget is $257 million more than what's coming in the door.

But, as required by the Arizona Constitution, the budget is "balanced.' That's accomplished in part by raiding various special funds to the tune of $220 million, including $15 million from a nationwide settlement with mortgage companies to help Arizonans deal with the effects of their financial fraud.

And there $113 million taken from the state's "rainy day fund.'

That structural deficit will shrink to $125 million the following fiscal year before finally coming in to balance -- assuming nothing else changes.