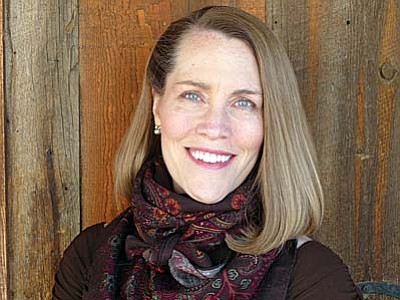 COTTONWOOD -- Clarkdale's Jodie Filardo made a presentation to the Yavapai Board of Supervisors Monday to show off the Phase One design of a plan to boost the broadband capability in the Verde Valley.

The Verde Valley Gigabit Project would boost the Verde Valley broadband speeds to "one gigabyte per second for all" and increase the opportunity for economic development.

She cited a study that justifies broadband development. That study shows that, "Businesses with broadband have revenue $300,000 more than those which do not," said Filardo. She says she is on a road show to spread the word about the project, underway since 2009.

VVREO determined that the project had to have a design plan to meet the timelines for the active construction of SR260. Since Internet was established as a "utility" in 2012, the highway department must allow an easement for the line as one of the utilities.

The project phase one design was funded by grant secured by the Yavapai College and matched by VVREO. The contracted design firm, GSW of Tucson, also designed the existing and operating gigabit network for Tucson.

The "Technical Assessment and Gigabit Network Roadmap" establishes the growth of the broadband link beginning with fibre and conduit in the ground for the "middle mile" along the construction route for SR260 between Camp Verde and Cottonwood.

Phase One delivers a Conceptual Middle Mile Network Route originating in Camp Verde (a colocation site) with splice points at key locations to the Yavapai -Apache Nation and connecting Cottonwood (along State Route 260) and SR 89A(E/W) to Clarkdale, Jerome and Sedona.

Filardo says because companies are proprietary about not mixing lines, a bundle of four conduits is proposed along SR260 so that Internet providers do not have to worry about conflicts.

A "funders" meeting was scheduled on Wednesday.

The entire project for the fully completed network is estimated at $17-$25 million.