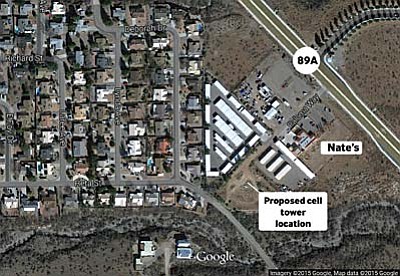 The current application is for the space directly behind Nate’s Cowboy Cafe, along the 89A and visible from surrounding neighborhoods. It asks for a conditional use permit to be able to build the 65-foot tower.<br /><br /><!-- 1upcrlf2 --><a href="http://verdeads.com/vi_images/Lampliter-Cell-tower.jpg" target="_blank"><b>CLICK HERE TO ENLARGE</b></a>

Senior Planner Beth Escobar said there were some 40 members of the public in attendance, and 16 shared their opinions with commissioners.

"The majority of people who spoke were against the application," she said. "Their concerns were regarding the impact on the view of the area, the property values of their homes, and health impacts."

People were also in support of bringing better coverage to the area, saying they relied on their smartphones for both work and personal use.

The vote included just four out of five members, with the commission's chair recused due proximity to the proposed cell tower site. Those four who voted recommended the application move forward, but with seven conditions ranging from establishing a second access point to the property, as recommended by police, fire and public works officials, to adding repeaters for public safety dispatch services.

With the commission's recommendation, the application moves to the Clarkdale council. Escobar said members will likely hear the proposal in a public meeting in May.

Members of the public will be able to comment, and Capital Telecom will get an opportunity to present their application to the council, as they did Tuesday night in front of the planning commission.

Escobar said one of the major concerns commissioners had was whether the applicant had searched out less controversial locations for the cell tower.

The current application is for the space directly behind Nate's Cowboy Cafe, along the 89A and visible from surrounding neighborhoods. It asks for a conditional use permit to be able to build the 65-foot tower.

"They really were limited in their choices because of our ordinances and zoning code," she said.

Using coverage maps, Capital Telecom representatives showed where current gaps are, and how the cell tower would expand to eliminate those gaps.

"They had looked at least five other locations," Escobar said. "Some of them didn't have the required zoning, and for some of them, the property owners didn't want to participate in the project."