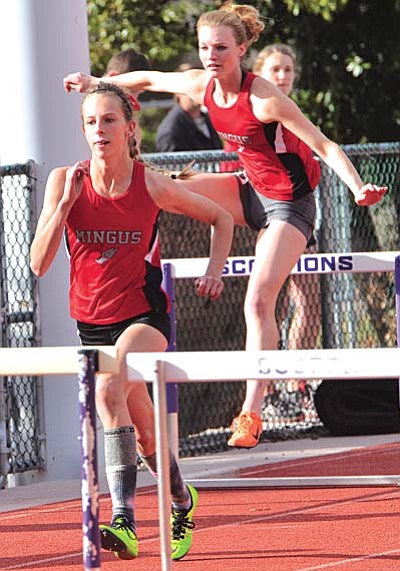 Perhaps the highlight for Mingus was Hannah DeVore. DeVore took first place in the 100-meter hurdles with a time of 18.28 seconds.

At a height of 4'8" Allison Whitworth won the girls high jump. She also won in the pole vault, but that score was not available at press time.

But, those weren't the only girls who did well for Mingus.

"That wasn't their best," DeVore said of runners Levi Collins, Javin Helsel, Jordan Prouty and Trevor Galloway. DeVore said that Collins is an athlete that can do multiple things in track.

"The thing about Levi is he has some explosive speed," DeVore said. "We use him in the 100. But, he's also our best at shot put."

Galloway also had a good night, winning the discus. As of Thursday morning, Galloway's score was not available. With a distance of 41'6.0', Collins finished first in shot put. And Galloway finished third. Junior Chance Gribauskas did 11'0' in the pole vault.  First year track athlete Evan Snyder won the high jump at 6'0.'

After the meet, DeVore said he was "proud of our guys."

"As long as they're getting better," he said. "I saw a lot of personal bests today from a lot of our younger kids. For some of them, this was their first meet. But, we're also improving with our varsity kids. Hannah's hurdles is a great improvement over last time. Allison is doing well in the pole vault. She'll always want to get better. We just want to make sure we're improving. Every meet we go to we're getting better and times are getting faster. That's a step in the right direction."

He added it will benefit his distance runners on Friday from not running on Wednesday.

"We're going to try and get both the boys and girls 4x800 teams out there," DeVore said. "Move some of our best kids out there. I know they're motivated for it especially kids like Megan and Jordan, Joseph Sandoval. All the kids that aren't in this meet. We're training them for Friday. Hopefully it pays off for them. They'll be motivated to run in the meet because they missed this one."