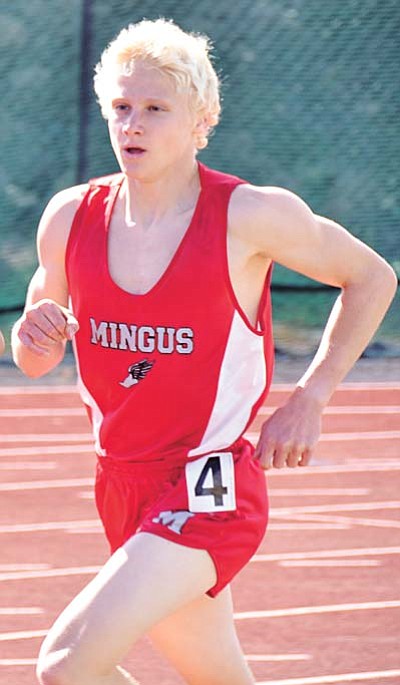 The Chandler meet is considered one of the nation's premier prep showcases and attracted 131 schools from Arizona, California, Texas and several other western states.

"Strategically," said Mingus Coach Yancey DeVore, "that was a good race for Jordan," who finished about 2 seconds ahead of Raymond Chaires of El Paso, Texas. "And, that was the best race ever by Sandoval. They both are improving, the times are coming down and that's what we want."

Across the board, said DeVore, Mingus athletes were extremely competitive in conditions that will rival what they will see in May at the state championships.

The Mingus girls are three-time defending state champions and while the Marauders lost three huge point-getters from last year's team, DeVore said, "we have some younger kids who are stepping up and filling in on some of those areas where we need the help."

He said the girls 400-meter relay team is a perfect example of that. Allison Whitworth is the only senior on that relay quartet and is joined by sophomore Auli Hanks and freshmen Hannah DeVore and Katelyn Prouty. Friday, they passed the baton through the one-lapper in a respectable 52.23 seconds, said DeVore.

For the Mingus girls, though, it was two seasoned athletes who carried the biggest load for the Marauders. Whitworth, a state placer two years running in the high jump, was one of 8 girls who cleared the top height of 4-10 in the vertical jump. She also won the pole vault with a jump of 8-6, with teammate Kylie Streck finishing third in the same event.

Junior Megan Goettl, Mingus' top individual point-producer in last year's state meet, came into Friday's competition slightly under the weather, according to DeVore, but still finished third in the girls 1600 (5:35) and fourth in the 3200 (12:18). In addition, Goettl teamed with Victoria DuCharme, Sydney Alexander and Cassia Gehl to finish 7th in the 4 X 800 relay in 10:45.25.

"Megan has run faster, but she definitely was not feeling well and still turned in some good times," said DeVore.

Friday, the Mingus tracksters will be at the Brophy Prep Invitational.

Milers stole the show in Saturday's National Elite Division of the Chandler Rotary Invitational. The girls 1600-mile saw 11 runners dip under the magic 5-minute barrier with Desert Vista senior Dani Jones dominating with a 4:44.46 clocking at the 1600-meter mark and 4:46.17 at the full mile. She also came back later in the evening to win the 800 meters in 2:11.42.

In other highlights from Saturday's national elite races, Mountain Pointe senior Paul Lucas was a double winner in the sprints with a 10.7 100-meter clocking and 21.58 for the 200.

Brophy Prep senior Isaiah Oliver won both hurdle events in dominating fashion: 14.14 for the 110-meter high hurdles and a 37.14 clocking in the 300 hurdles.

Sophomore Auli Hanks recorded a personal record 13.47-second clocking in the girls 100 meters, and, said DeVore, "she anchored both our relays. She is improving."

Senior Javin Helsel ran his first open 400 of the year and finished 7th in 52.26 seconds. "He's sitting in a good spot with that time," said DeVore. "We know he is faster than that, but for the first time out, that's a good time."

Boys 800 meter specialists Joseph Doerksen and Keenan DeVore clocked in with times of 2:10.68 and 2:12.51, respectively.

In addition to Goettl's 4th-place finish in the 3200, Mingus got solid performances from junior Victoria DuCharme and sophomore Cassia Gehl. They turned in respective times of 13:03.12 and 13:07.04.

Boys throwing events - Versatile senior Levi Collins, who also runs on Mingus' spring relay, was 6th in the shot put with a throw of 40-feet, 5-inches. In the discus, Collins was 13th overall with a throw of 109-1, and sophomore Trevor Galloway was 7th at 114-03. "Not their best throws," said DeVore, "but a lot of the kids were saying the ring was very slick and the throws were not as far as they are capable.
Contact
Sign up for our e-News Alerts
Most Read
7 days
30 days