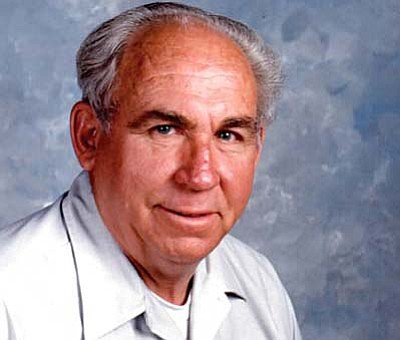 Someone much wiser than me once said that you've led a good life if you can honestly say the world was a better place because of you. Ernest Gabrielson, who passed away Wednesday, March 11, 2015, led a good life.

My father was many things to many different people. To me, he was a dad. He was always there when I found myself in trouble. He was always ready with an encouraging word whenever I would try some new endeavor.

To others my father was a Marine. Ernie served in Korea with Easy Company. To this day, my sister and I can blame our horrible singing voices on the fact that the first song we learned was the Marine Hymn. My father was fiercely proud of his time in the Marine Corp. He regularly attended Marine Reunions where the stories got wilder as the years passed.

To many my father was a teacher.

Following his graduation from ASU, Ernie began his teaching career at Chandler Jr. High School. From there we traveled to Kingman High School for two years before my father began his long tenure at Mingus Union High School.

My father loved teaching! I am a firm believer that good teachers are born to teach. They get a satisfaction far beyond what money can buy when they see a student "get it" and understand the subject being taught. Ernie was one of those teachers.

To see the gleam in his eye, the smile on his face, when he talked about teaching was truly remarkable. One of my dad's former co-workers told me an interesting story when I called to inform him of my father's death. I have known this man my entire life. He taught at MUHS with my father for many years.

"Mike," he said, "When you are writing your father's obituary you make sure you let everyone know that the new school in Cottonwood would not have been built if it weren't for your dad's efforts. He said he could get it done and by God, he did. Ernie is the father of Mingus Union High School in Cottonwood."

Ernie retired from Mingus in the late 1980s but he didn't stop teaching. His passion has always been reading. My dad believed that with reading, a person can go anywhere, be anyone, and do anything they dreamed about.

In the past decade I would bet my father gave away more than 5,000 books to young readers. When I asked my father if there was any charity that he would like people to donate to in his memory he told me this; "Mike, ask them to give a book to a child.

Ask people to go to the book section in any drug or grocery store and pick up an inexpensive children's book. Then ask them to give that book to a child. I think if people will do it just once they will see how eager kids are to read and they'll end up doing it again and again. If I could ask people to do anything in my memory that's what I would ask of them."

Ernest is survived by his daughter Janet and her husband Dean. He is also survived by his son Mike and Mike's wife Laura. Mike's son Brian and his family also survive Ernest. My father was preceded in death by my mother Carroll in 2005. I have never met a finer man in my life than my father. I love him. He will be missed every day!