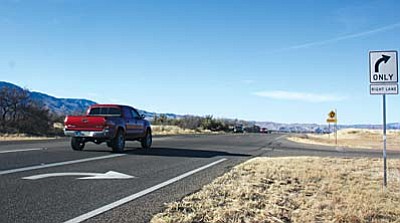 While five of the roundabouts have distinct side roads connected to them, two more do not have existing side roads. Those connected intersections include Thousand Trails, Coury Drive, Cherry Creek Road, Horseshoe Bend, Park Verde Road and Wilshire Road.VVN file photo

VERDE VALLEY - Arizona State Department of Transportation is clarifying that the SR 260 widening project will build seven full roundabout access points with the beginning of new construction. The ADOT board approved a budget of $62 million for the road expansion, including rights of way acquisition.

While five of the roundabouts have distinct side roads connected to them, two more do not have existing side roads. Those connected intersections include Thousand Trails, Coury Drive, Cherry Creek Road, Horseshoe Bend, Park Verde Road and Wilshire Road.

The exact location of two more roundabouts have been vague because there is no existing development in the area, but ADOT says they will be built, approximately one mile apart between Coury Drive and Cherry Creek Road.

James Bramble, Operations Engineer for the ADOT Prescott District, reported to a meeting of the Verde Valley Transportation Planning Organization Wednesday morning that a multi-modal pathway will be constructed between Cherry Road and Wilshire Drive for use by equestrian and bicycle riders. The pathway will be paved about 10 feet wide, separated from the widened roadway foot print. Bramble says they are separated from the roadway at a distance that would have no less than six feet of separation when crossing washes or culverts.

Bramble says that shoulders will be built up from Thousand Trails Road to Prairie Lane in Verde Village, even though they will not have a separate paved pathway.

Construction plans are now at 60-percent completion, with construction expected to begin at the end of this year or the beginning of 2016, according to Bramble. Negotiation with a possible Construction Manager at Risk has not finalized.

ADOT is now accepting comments on its new five-year Transportation Plan, 2016-2020. Three public hearings are being held. The first was held in Tucson on March 20. Upcoming meetings will be held in April and May.

The Northern Arizona hearing will be held May 15 at 9 a.m. in the Town of Chino Valley Council Chambers, 202 N. State Route 89 in Chino Valley.

The Board is expected to adopt the plan at a June 19 meeting at 9 a.m. at the Pinetop-Lakeside Town Hall, 1360 N. Niels Hansen Lane in Lakeside.