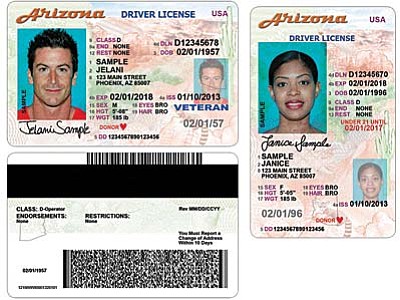 PHOENIX -- State lawmakers are finally pushing ahead with legislation to let Arizonans get special driver's licenses that will let them board commercial aircraft next year.

And that means the rest of us will get licenses that say, in essence, no flying for you.

The House Appropriations Committee on Thursday approved legislation which requires the Motor Vehicle Division to develop a special license that complies with the Real ID requirements of the U.S. Department of Homeland Security. That includes everything from the document itself being designed to make it harder to forge or alter to having MVD officials run some extra checks on the documents supplied by applicants.

It'll cost more -- perhaps an extra $15. And the license will be good for just eight years instead of through age 65.

But the trade-off is that holders will be able to board commercial aircraft next year without having to produce a passport.

Oh, and one more thing: For political reasons, it won't be called a "Real ID' license.

"We are calling that a 'Voluntary Travel ID' because, in Arizona, Real ID is banned,' explained Sen. Bob Worsley. And he is unwilling to ask his colleagues to lift that ban.

That bit of political wordplay all goes back to 2001 when terrorists using state driver's licenses managed to board airplanes, hijack them and fly them in to the World Trade Center and the Pentagon. The result was federal Real ID legislation to make the licenses more secure, both in terms of the document itself and ensuring that those who get them are who they say they are.

But many Arizona lawmakers saw this as creation of a national identification card. So in 2008 they prohibited MVD from ever issuing such a document.

That hasn't been a problem -- until now.

Worsley told colleagues that access to certain facilities already is restricted, open only to those with a license recognized by Homeland Security or a passport. And beginning in January -- unless the date is pushed back -- the same rule will apply to board commercial aircraft.

All of that would change, at least for those who want, if SB 1274 becomes law.

The measure already has gained Senate approval. But it took a special vote of the House Appropriations Committee to revive it after House Speaker David Gowan balked at moving it forward.

During Wednesday's hearing, no one spoke against the idea of a voluntary license. And Worsley purposely assured lawmakers that, unlike the new passports, there will be no radio frequency identification chip.

That electronic chip can be read by special devices, leading to concerns that the government will be able to track the movements of the holder.

Rep. Rick Gray, R-Sun City, said he can support the legislation because getting the enhanced license remains voluntary.

"It allows those who have concerns and don't want to have it, to not need it and just drive around the country,' he said.

That, however, goes to that question of what each type of license will look like.

The ones suitable for boarding an aircraft will have a gold star, making it easy for airport security to determine this particular type of Arizona license is valid for flying.

But federal regulations require that if states issue both compliant and non-compliant licenses, those in the latter category must "clearly state on the face' that the card is not acceptable for official purposes.

Rep. David Stevens, R-Sierra Vista, wondered why the need for that special language, as the lack of the star should make that obvious.

"It is overkill,' Worsley conceded, but said it's not his decision.

State transportation officials said they are still studying the requirements for what would have to be on each type of license.

They also had no immediate answer on whether that special "no travel' language would be put only on new licenses or on any license when renewed.