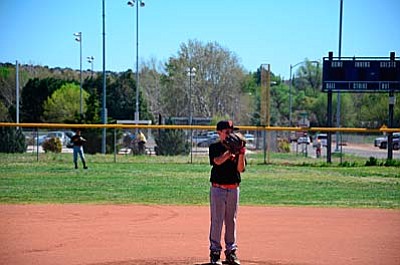 COTTONWOOD - The games have begun. It's spring time. That means time for little league baseball and softball.

The day started with official introductions of all 36 baseball and softball teams.

The levels of the sport in Verde Valley little league are t-ball, coach-pitch, minors and majors. The first pitch was thrown out by Cottonwood Police Chief Jody Fanning.

Verde Valley Little League board member Shawn Zingaly said it was a great opening day for the league.

"There's a lot of work that goes into it," Zingaly said. "We made some changes to make it go as smoothly as possible. We handled it perfectly. We got the opening day underway on time. We got all the teams through and were able to say thank you."

This is the fifth year Zingaly has been with Verde Valley Little League.

During the ceremony, Zingaly led the parents through a pledge to promise good sportsmanship and to not argue with the umpires. But, Zingaly said that hasn't been a problem.

"It is something that sometimes just needs to be talked about," he said. "It's a competition. No matter what happened with any competition, there's an emotional attachment to win. We have to remember it's not about winning. It's about the kids having fun, playing together and learning a new skill set."

Someone who is teaching the game of baseball to very young players is Savannah Carleton. Carleton is the head coach of the t-ball Red Sox. This is her fourth year coaching t-ball.

"The kids did amazing," she said. "Their hits were awesome. Their fielding was perfect. They did really good. It was really exciting to see them grow from our first day of practice to their first game. I'm really proud of them."

She said that coaching baseball at this level means focusing on little things.

"I just go on the absolute basics of the game," Carleton said. "That's knowing the positions, knowing what bases there are. Knowing when to run to the bases. As basic as I can get it, that's what I teach."

She added that as a coach she needs to find a way for her players.

Like many little league coaches, Carleton started coaching little league because of her children. She started when her oldest son Aiden was in T-ball. Aiden is now in coach-pitch baseball. Her youngest son Sawyer is on her t-ball team this year.

The next level up in Verde Valley Little League is coach-pitch. D.K. Green is the coach of the coach-pitch Volcanos.

"This is the first age group that we use all the full rules of baseball," he said. "It's a bit of a confusing name. The coaches do not pitch. We use a pitching machine. That way the balls are consistent 100 percent of the time. They know exactly what to expect with every pitch coming down. It's the same pitch every time."

Green said that this is the first level the players see the core rules of baseball.

"It's three strikes and you're out," he said. "As opposed to t-ball where everyone runs to first base, and everyone stops and throws to first. This is the first time if the kids hit a ball into the gap, they can run two, three bases."

Green said there is one main thing he wants to accomplish.

Winning certainly isn't the biggest concern in little league. But, the majors' level definitely is more competitive than all the lower levels.

Jeremy Peters is the coach of the majors Rangers team. Saturday wasn't a great day for the Rangers, they lost to the Giants 13-3.

"It was a good opening day overall," Peters said. "They had a great game. We shot ourselves in a lot of areas, but they went out there and played their game."

Peters said he expected his team to do a lot better.

Peters said what he likes most about coaching little league is teaching the kids life lessons.

On the winning side of the game was the Giants. They are coached by Jeff Lynch. Lynch is also president of Verde Valley Little League. Lynch described how Saturday went for his team this way.

"The kids did a great job," he said. "It shows that they've been practicing hard. We did make a few errors. Our pitcher, Ryan Lindsay had a great game. He pitched all four innings. He had zero earned runs and six strikeouts. He only walked one. We had some great plays in the field. Some great catches were made. The bats also did really well, we had 11 hits."

Lynch said that the Rangers were a tough team despite beating them by a score of 13-3. There are five teams in the majors' level of Verde Valley Little League. Lynch said they will also play teams in Camp Verde Little League as well as Sedona.

In Verde Valley Little League, Lynch said he expects his Giants to be the majors' team to beat.