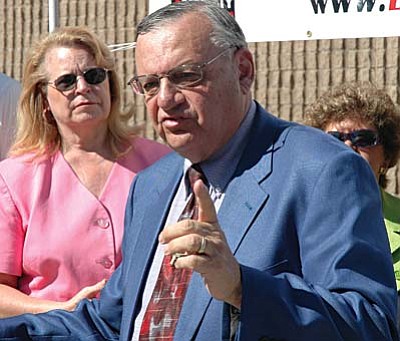 Attorney Tim Casey told judges handling the other cases he is "ethically required' to withdraw as the legal counsel for the sheriff and the Maricopa County Sheriff's Office. In legal papers filed in both cases, Casey said he cannot disclose the reason.

But Karen Clark, who Casey has hired as his own ethics counsel, said the move is directly related to testimony the sheriff gave last week in his contempt trial before a different judge. In that case, Arpaio told Judge Murray Snow that Casey, as his attorney, had hired a private investigator to look into allegations that Snow's wife had told someone else that the judge "wanted to do everything to make sure I'm not elected.'

What complicates the matter, Clark said, is that Jerry Sheridan, Arpaio's chief deputy, testified the following day that there was no investigation into Snow, his wife or his family. That puts Casey in the position of being the person who has the knowledge to reconcile, if possible, the two versions of the story. But Clark also said her client is limited in what he can say. "Mr. Casey is aware of his obligations as an officer of the court to be completely candid with the tribunal and to cooperate with the court, while at the same time remain in strict compliance with his ethical obligations to his former clients Sheriff Arpaio and the MCSO,' she told Capitol Media Services. "Those duties include maintaining client confidentiality as well as attorney-client privileged information.'

It remains to be seen whether Casey will be called as a witness when the contempt hearings resume in June. The case before Snow involves charges that the sheriff and his top officers ignored the judge's orders to stop racially profiling people. That stems from what Snow found were practices of deputies who said they were looking for those not in the country legally but actually stopping and detaining people largely because they were Hispanic. And the judge said the practices continued even after the Department of Homeland Security stripped the sheriff's department of its authority to enforce federal immigration laws.

Arpaio has conceded the judge's orders were not followed, saying he delegated compliance to others and that the injunction "slipped through the cracks.' Snow is now deciding whether to hold the sheriff and others in contempt and, potentially, whether to follow up with criminal charges.

It was during Snow's direct questioning of Arpaio last week that the subject of Casey hiring an investigator came up. "Results confirmed that your wife was in that restaurant,' the sheriff responded. He said that the investigator, after talking to person who provided the tip, apparently "confirmed that that remark was made.'

At a press conference Tuesday, the sheriff sidestepped questions about whether he owes the public an explanation into looking the comments by Snow's wife as well as his separate admission of an investigation of the U.S. Department of Justice which has a separate racial profiling case against MCSO.

"I'm not going to get into semantics about investigations,' Arpaio said.

"But we did the right thing and that's the way it is and I'm not going to talk about it,' he continued. "The truth will come out.'

And the sheriff would not answer a question of whether anything he did related to the judge's wife was designed either to intimidate him or get him removed from the case.

But he brushed aside the possibility that the news that has come out of the federal contempt hearings will affect his efforts next year to get a seventh term.

"I've had some tough elections,' he said of prior races. But Arpaio insisted "the people still want me.'

Casey's disclosure of his ethical conflict because of Arpaio's testimony came in separate filings.

She is hearing arguments by Latino and civil rights groups trying to void the last key section of the 2010 state law targeting those in the country illegally. It requires police to question those they have stopped for any other reason about their immigration status if there is reason to believe they have no legal right to be here. The U.S. Supreme Court, while voiding some sections of the law, refused to declare that provision unconstitutional on its face.

What the high court never addressed -- and what remains in front of Bolton -- is a separate question of whether the provision violates the equal protection rights of minorities. Challengers are now trying to prove lawmakers and then-Gov. Jan Brewer who signed the measure into law acted with "racial animus.'

Casey's second and nearly identical filing went to the 9th U.S. Circuit Court of Appeals. He has been representing the sheriff and Maricopa County in a lawsuit challenging a 2006 voter approved measure which denies bail to those charged with "serious felony offenses' if they are in this country illegally and if "the proof is evident or the presumption great' that the person is guilty of the offense charged.

Appellate Judge Raymond Fisher, writing for the majority, said there is a constitutional presumptive right of those arrested to be freed on bail. But he said a blanket rule that those in the country illegally and accused of certain crimes must be held without bond is not justified.

"The record contains no findings, studies, statistics or other evidence ... showing that undocumented immigrants as a group pose either an unmanageable flight risk or a significantly greater flight risk than lawful residents,' Fisher wrote.

That case is now pending before the U.S. Supreme Court. Casey's withdrawal does not leave Arpaio without legal representation. Casey, who is in private practice, said the Maricopa County Attorney's Office has been involved in both cases and can continue to handle matters.