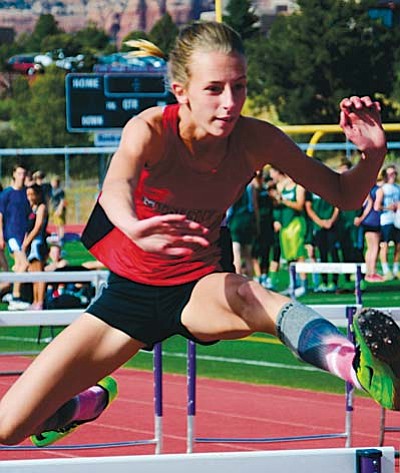 GLENDALE -- On Wednesday, Mingus track and field competed in its last meet before the state meet.

The Marauders were in the Ironwood's Last Chance Qualifier meet at Glendale's Ironwood High School.

Mingus was supposed to compete in the Yavapai County Championships at Bradshaw Mountain High School the week before.

But, that meet was canceled because of rain and was rescheduled for the same day as the meet at Ironwood. Because of that, head coach Yancey DeVore decided to skip the Yavapai County Championships.

On the boys side, it was a pretty good day for the Marauders.

Alec Phyfer finished ninth in the 300 meter hurdles at 45.39 seconds.

Collins finished fifth in the shot put with a throw of 43 feet 6 inches.

Trevor Galloway finished third in the discus with a throw of 132 feet 11 inches.

Chance Gribauskas finished second in the pole vault with a jump of 12 feet six inches.

On the girls side, Auli Hanks finished sixth in the 100 meter dash at 13.71 seconds.

On Thursday, head coach Yancey DeVore said it was a good meet for his team.

"There were kids that did well," DeVore said.

DeVore said he is sure his boys 4x800 relay team will qualify for the state meet.

DeVore added that he was pleased with how Goettl did.

Galloway is another DeVore was impressed with.

DeVore added that Galloway is in a good position for state.

"Right now, he's sitting at No. 2," he said. "I don't expect that to change a whole lot. Hopefully he can hit the top mark at state."

Collins will be the only Mingus boys shot put thrower to make the state meet. Galloway actually had a personal record in shot put with a throw of 38 feet 1 inch, good enough for 13th place.

But DeVore said that wasn't enough to place him in the top 24. Stefeno Dalu finished 15th with throw of 37 feet 7 inches, also not good enough to qualify for state.

Galloway has a good chance to win the Division III boys discus championship. This season, he has thrown 130 feet or higher six times and he has only thrown less than 120 feet twice. His best throw was at Sedona Red Rock High School where he threw 146 feet 1 inch.

Galloway said it's been a very successful year for him.

"I feel like I improved this season," he said. "I feel like I put myself into better positions to do well at state. Now it's just time to show up at state."

Although he's placed second, Galloway is focused and ready to finish at the top.

Galloway is an overall very good athlete for Mingus.

The sophomore was the starting tight end for the football team last fall.

He took the winter sports season off. But said next year he plans on doing football, basketball and track and field.