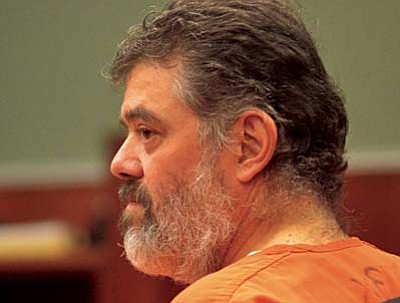 CAMP VERDE -- Three members of the Gaver family involved in Cottonwood's Walmart parking lot shooting and fight March 21 were in court Wednesday. All five remaining adults and two juvenile family members are held by authorities pending resolution of charges stemming from the brawl with police.

Amid a flurry of motions, the three Gavers in Yavapai County Superior Court Wednesday all asked to have their release conditions modified and their bond amounts reduced.

Ruth Gaver was excused from the Wednesday hearing after her defense attorney, Sebrina Shaw, told the court the 52-year-old mother was not actively involved in the brawl.

Shaw asked Judge Joseph Butner to "look at Ruth differently from the other defendants. The state has treated her the same," she said, but "there is little evidence that she is involved or attacking officers."

Shaw further complained that "it is deplorable that a grieving mother is not allowed to have contact with other family members."

Deputy County Attorney Patti Wortman countered that a mother protecting her child "does not usually stand in the middle of a fight. A united group of people is not the same as an individual. She is not innocent," said Wortman.

Attorney Glen Hammond took a similar tact, again using the same dashcam footage to show that the father, Peter Gaver, was not actively involved in the brawl. Hammond presented Licensed Private Investigator Kevin McCarthy to testify since he has seen all available video and camera footage and listened to officers' statements that the 55-year-old Gaver was not part of the fight.

Judge Butner questioned whether Hammond was presenting "hearsay on hearsay," but also acknowledged that he had heard Peter Gaver repeatedly yelling at police, "stop hitting the children. Stop being a Nazi."

Butner was not so generous with Jeremiah Gaver, 28, who is charged with nine felonies and four misdemeanors. Butner refused to lower his bond from $75,000.

Attorney Alex Harris asked the court to approve transportation costs for a neuro-psychological test for Jeremiah Gaver, whom she maintained "was not doing very well." She told Judge Butner the test is needed because she needs "the ability to be able to communicate with Jeremiah."

Harris also filed a motion to compel discovery. She said she wants personnel records of all the officers involved in the fight. Butner set oral arguments on that motion for May 22.

A motion still pending, but was not discussed Wednesday, is one for change of venue, signed by attorneys for all five defendants.