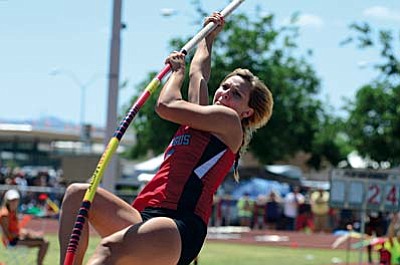 Allison Whitworth, a senior, competes in the Division III girls pole vault on Saturday at Mesa Community College Whitworth placed seventh in the pole vault and sixth in the high jump. VVN/Derek Evans

The Mingus girls had won the Division III championship the previous three seasons. But, this season proved to be somewhat of a rebuilding year for the Marauders, as they placed 10th.

For the Marauders, Allison Whitworth had a good day. Whitworth finished sixth in the high jump. Whitworth jumped 4 feet 10 inches. She also placed seventh in the pole vault. Her jump in pole vault was 9 feet 6 inches.

After running the 800, Goettl said she had mixed feelings about her performances.

"I'm happy with my place given my competition," Goettl said. "I'm a little bit disappointed with my times, but I got a PR in the 800. I was trying to go for the school record. But, I didn't quite make it."

The girls 4x400 relay team of DeVore, Goettl, Mackenna Jung and Auli Hanks finished eighth with a time of 4:25.84.

After the 300 meter hurdles, DeVore said she was happy with how she did.

"I did really well," DeVore said. "That's a PR for me by almost a second. I beat some of my rivals that I never beat before. I'm really happy."

DeVore also qualified for state in the 100 meter hurdles, but didn't make finals.

She mentioned it was simple how she ran her best time at state.

"I just knew I had to push myself really hard," she said. "I really wanted that PR. I gave it my everything and I had the strength to do it."

After the meet, head coach Yancey DeVore said for the most part things went as expected.

"We knew it was going to be a tough meet," DeVore said. "We needed things to be perfect for us and they weren't. Our kids came down here and they put their best foot forward. We just didn't have enough across the board. We weren't as diverse as we had been in the past."

DeVore said the success of the past three years created high expectations.

"If you're coming off three state championships in a row, and you don't get the fourth one, it's always people will ask what happened?" he said. "The fact of the matter is we didn't have the depth in a lot of our spots. We need to develop some of our younger kids. We need to hopefully get more kids interested in coming out for track and field."

The biggest drop off for the girls was in throwing. Last year, they had multi state champion in Heather Calandra. This year the Marauders didn't a single girls thrower make state.

DeVore said he was happy with how Goettl performed.

"The last few meets, every time she ran she got faster," he said. "This was another one of those meets where she got better in everything she did. I'm proud of her."

Another girl DeVore was impressed with was his daughter Hannah.

"Fifth in the 300 hurdles was a surprise," he said. "I'm really proud of her for that. As a freshman, even getting into the finals is a big deal. She was able to get us some points out of that."