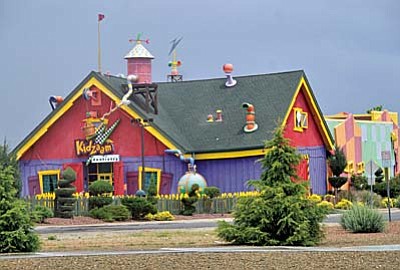 COTTONWOOD -- Two projects are returning to the Cottonwood Planning Commission Monday night along with a new rezoning request to allow a recreational vehicle sales lot.

When the project was first proposed in mid-November 2013, the Skyline Apartments conversion drew a crowd of neighborhood opponents for a rare standing room-only hearing.

The Skyline Apartments had been proposed to be updated and sold as condominiums with a larger cluster of 43-additional units added in the future.

But, the neighbors worried that the project was not compatible with the community with its one and two-story units blocking views, even though commissioners seemed to support a proposed Planned Area Development zoning on the three parcels of less than 6 acres.

There were also issues about access, since 16th street dead-ends, leaving only a single access in and out.

Commission Judd Wasden. "I met with neighbors and they want to see the developer come up with something more reasonable."

The commission tabled action pending meetings between neighbors and the developer to alleviate concerns. But, that took a long time. The project reportedly has made concessions to reach agreement and now returns to the commission for a recommendation.

Kidzaam Dentistry last month, drew support of parents for its quirky, but appealing and loud motif to appeal to children. But the appearance disturbed commissioners who want to protect the entrance to the city near the SR89a/260 intersection. A muted exterior design is expected to appease the commission.

The Galpin Auto dealership operation in the Prescott area, wants to build an RV sales lot on SR 89A between 8th and 10th Streets.

The operations' neighbors are also automotive dealers, but the land parcel is a mix of light commercial and agricultural residential. The land needs a heavy commercial zoning to operate there.