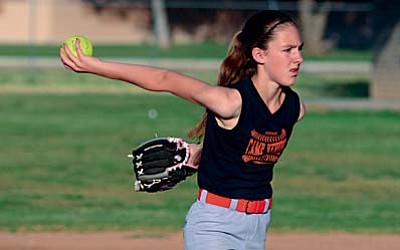 After the game, Giants coach Jason Freeman said despite the loss, the season has been well for his team.

Freeman said the season has gone like he expected.

"We've had to do a lot of growing this year," Freeman said. "We've come a long ways. The girls were a little shy at the plate at first. But, they're swinging the bat now. It's come along pretty well. We're about 500 right now."

Because the Giants are the only Majors softball team in Camp Verde Little League, all the teams they play against are in Verde Valley Little League.

Freeman said it's good for his team to be familiar with its opponents.

"The team we just played are the ones to beat," he said. "There are a lot of tournament girls on the team. They play really well. But our girls have grown up quite a bit also."

Players in the Camp Verde Majors range from 10 to 12 years old.

Freeman said his goals for his players are clear.

"At this level it's to get all the fundamentals down," he said. "Hopefully they've learn some if they have grown up in the sport. Right now we really work on pitching."

After the victory, Shawna Figy, head coach of the Verde Valley Alabama Crimson Tide said the season has been going strong for her team.

She added it's the little things that has led to being undefeated.

"Because we work hard," she said. "I have my three pitchers work with pitching coaches on their own time. I have practice every week. My girls just want to get better. I have a really good set of girls."

Figy agrees with Freeman about the goal of softball at this level.

"It's always for them to learn," she said. "And I want them to get from point A to point B. In the majors, for me I don't think we should walk on the field without the expectations that we're going to win. Doesn't mean that if we lose it's a bad thing. I think at the Majors level your expectations should be we want to win. I think that should be the goal."

This is Figy's 10th season coaching Little League softball, but only her first year in the Majors level.

Figy said there is a definite difference between the Majors and lower levels.

Mainly in how teams go about winning.

The Crimson Tide has one more regular season game left before the tournament.

Figy said that she had certain expectations for her team coming into the season.

"I had high expectations for this team," she said. "Because I've been coaching in Verde Valley Little League so long, I know a lot of these girls. I knew when I drafted my team, I knew the girls I was getting.," she said.

Figy added that created her expectations.

One player who has made a big impact for the team has been Anastazia Buckner.

Anastazia played first base and catcher during Tuesday's game.

She is 12-years- old and has been playing softball for seven years.

Anastazia agrees with Figy that it's been a very successful season.

"I think it's gone great," she said. "We're a good team and we work well together."

She mentioned she has improved as a player during the season.

Anastazia does a lot for the team.

She has played three positions this season.

But of all she does she said there is something she like the best/.

Out of first base, catcher and pitcher, Anastazia said she likes playing first the most.

She said she is more familiar playing that position.

"I have more experience there," she said.

She said there are some reasons why she enjoys softball so much.

"It's fun and it's something I like to do on my free time."

The Crimson Tide has two more regular season games left before it will play in the Tournament of Champions.

If the team wins the tournament.

They will be the best team in the district.