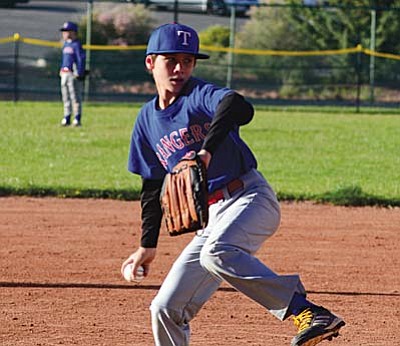 Jehiah Rogers gets ready to pitch for the Verde Valley Texas Rangers during Friday’s 14- 11 win over the Sedona Dimondbacks. VVN/Derek Evans

The Rangers kept their winning ways going. They are now 14-2 overall on the season and are tied with the Giants for first place in Verde Valley Little Majors.

The Rangers were coming off of Wednesday's 11-2 win over the Tigers. Things weren't easy in this game for the Rangers. After leading 5-2 after the first inning, they then let the Diamondbacks come back and trailed 8-7 after the second.

The Rangers then responded with four runs in the fourth inning all with two outs to retake the lead.

After the game, head coach Jeremy Peters said it was good for his team to win despite not playing its best baseball.

"I would say we made more mistakes on defense than we did against the Tigers," Peters said. "We played a pretty flawless game on defense against the Tigers. We came out here and we probably had at least seven errors tonight. We had some key errors. But, we also got some hit by pitches and walks so it was a combination I think of pitching and defense. We put the runs up. It was a combination of our pitching and our defense I think that we struggled with a little bit."

Peters said it shows his team has character that it was able to come back and win after trailing.

"They just don't give up," he said. "They didn't quit. They didn't have their heads down in the dugout. They kept picking each other up. They know what baseball is a long game. It was early in the game and we've come back a lot of times."

Peters has been coaching in the Majors level of Verde Valley Little League for three seasons now. He said this team has something he hadn't experienced before.

"The thing I love about this team is different from any majors team I've coached," he said. "Is the fact that there is a chemistry and they have fun with each other. I think that's the biggest thing, one to 11, they're a team."

There are two games left for the Rangers. One is against the Verde Valley Little League Diamondbacks and the other is the makeup game against the Giants.

The game against the Giants is for first place, but Peters said his team can't overlook the Diamondbacks.

"The Dbacks have played us close twice," he said. "I think certain teams just play you tougher and they play us tough. So we're not overlooking them."

There's no question Drew had a big game for the Rangers on Friday. He went 3-4 with two RBI. Drew played shortstop, second base and pitched on Friday.

He said there are a few ways that his team has been able to keep winning.

"Hits, effort and bringing up people," he said.

Drew is a 12-year-old and has been playing baseball for six years. He said there are a few reasons why he loves the sport.

"You get exercise, you get to work on your skills," he said. "You can work on everything."

Drew is one of several 12-year-olds in their last year of playing Little League. Peters has said he will miss his players, but he isn't ready to say goodbye yet.

"We still have some baseball left," Peters said.