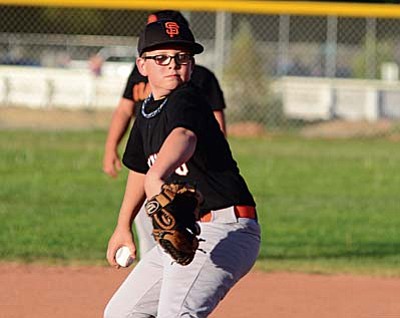 Josh Schegle of the Giants gets ready to pitch in Wednesday’s game vs the Diamondbacks. The Giants are tied with the Rangers for first place in the Majors. VVN/Derek Evans

Wednesday's game didn't start out well for the Giants.

They trailed the Diamondbacks 5-0 after the first inning. But, the Giants' offense came to life with help of first baseman Tanner Lynch, who had three doubles, two singles and four RBI. Once the Giants went ahead by 10, the game ended in the run rule.

"We made a lot of errors early," Lynch said. "We weren't playing our ball game. I think summer vacation kind of hit some of these guys early."

Lynch said his team responded quickly after the poor inning.

"We got our focus, gained composer and played Giants' baseball," Lynch said. "We did the little things. We hit the ball well. We played the baseball these guys have been practicing and playing hard a long these guys can play."

"We were swinging at good pitches," he said. "We weren't letting ourselves get deep into the count. We were taking the first pitch and hitting it hard. You can't play a pitchers' game. You have to play a batter's game."

He added it wasn't like his team to play sloppy early.

"It's a little out of character," he said. "That's what separates a good team from a bad team is teams that don't hang their head and they battle back. We know we can score runs."

There are two games remaining for the Giants. One is Friday against the Camp Verde Angels at Butler Park at 7:30 p.m. The other is Monday against the Rangers, the game that will decide first place in the Majors standings.

The game against the Angels will be tough.

The good news for the Giants is games against teams outside of the Verde Valley league don't count in the standings.

"We just need to do little things," Lynch said. "We've been working hard all season. We need to work together as a team. We just need to play our game."

Since the game won't count for the standings, Lynch said it allows his team to approach it a little differently.

"We're treating it more like a practice," he said. "We'd like to win. But we really need to approach it like a practice and get us ready for Monday."

The Giants chances on Friday and Monday will be much higher if Lynch's son Tanner can keep the hot bat.

"I was just waiting for a good pitch to hit," Tanner said.

Tanner said it would be a big accomplishment for his team to win the majors.

"It would mean a lot," he said. "We would get to go TOC (Tournament of Champions)."

The head coach of the Diamondbacks is Brandon Figy. Figy's wife Shawna is the coach of the Verde Valley Little League softball Majors Alabama Crimson Tide.

Last year, the Diamondbacks won the Majors championship. But this year has been different. Figy said his team has had to do a lot of learning this year.

"We're a young team," he said. "We jumped out 5-0 and just couldn't hold on. We started making a few mental errors and it got away from us there."

But, Figy said his team has improved from the start of the year.

"We've gotten better every time," he said. "We were striking out a lot, now we're making a lot more contact. We've probably hit five or six over the fence this year. We're young and getting better every day."

Out of 12 players, only four were on the championship team last year.

He mentioned he thinks there were a few reasons why his team didn't hold the early lead.