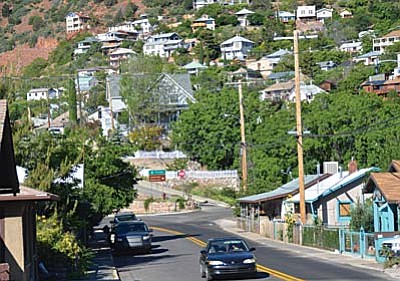 The Town of Jerome has become a magnet for tourists, and at the same time vacation rentals have become popular. But Jerome is sticking with its position that vacation rentals in residential neighborhoods were never allowed. VVN/Vyto Starinskas

JEROME -- The town of Jerome is sticking with its position that vacation rentals in residential neighborhoods were never allowed.

Homeowners will have to appeal to the town's Planning and Zoning Board, Board of Adjustment or eventually to the courts if they think they have a right to rent out homes on a short-term basis.

That comes from Mayor Lew Currier on the heels of a statement by the Goldwater Institute notifying the town that four Jerome property owners were beginning an administrative appeal process under Prop. 207, the Arizona law that allows for compensation when new regulations reduce the value of homes and property.

The property owners put in vacation rentals when they did not have a legal right in the first place, he argued.

Vacation rentals have become popular on the Internet and homeowners rent one room to entire houses on nightly to weekly to monthly basis. The concern is that neighborhoods will lose their local identity with constant transient traffic. Others believe the marketplace should control the vacation rentals.

Currier said that vacation rentals are not fair to residential homeowners. "They have a right to peace and quiet," the mayor said.

The reason vacations rentals were never listed in the code is because the Jerome Council in the mid-1970s "didn't even think about vacation rentals," Currier said.

"The law is the law," the mayor said. A team of lawyers wrote the ordinance. "If a specific use is not listed, it's not approved."

Currier said at least one homeowner has appealed his case to the Jerome Board of Adjustment and a meeting will be scheduled to hear the case.

However, there are five members on the board and Currier said he has been told that some board members may have recused themselves from this case. There needs to be three votes, either way, to rule on a case, he said.

If the homeowner loses their appeal with the board of adjustment, then the next step is to appeal to the Superior Court, Currier said.

Two weeks ago, the Goldwater Institute announced that four homeowners in Jerome filed notices with the Town of Jerome that they are entitled to compensation under Arizona's Proposition 207.

Jared Blanchard, a staff attorney with the Goldwater Institute who is representing the property owners, said Friday that the town knew homeowners were using their homes for vacation rentals for years.

As an example, Blanchard claimed that the town issued his clients town business licenses for vacation rental lodging. He said that happened for four years for some of his clients. Town hall was closed Friday, and this could not be confirmed.

So it's hard to say the town didn't know they weren't running vacation rentals, the homeowner's attorney said.

There is nothing in the town code against vacation rentals and if they want to ban them, "just declare it illegal," Blanchard said. There's nothing about one-year rentals in the code, and his clients are allowed to have those, he pointed out.

Blanchard said the next step in the process is to have a hearing in front of the Board of Adjustment, but he also was told that there may be a problem because members may have recused themselves.

So the town and Blanchard have been working together to come up with an appeal process that will be fair to his clients and the town. He said the good news is that while the appeal is filed, the town will not be able to move ahead on any enforcement on these four clients, the attorney said.

These homes will be able to be rented out as vacation rentals until this is resolved, he said.

"If you buy a house with the intention of using it as a rental property and the government says that's allowed, the government can't come back after-the-fact and refuse to let you rent the property out without compensating you," Blanchard said in a press statement two weeks ago.

Currier said that this may have been the case if the voters in Jerome had passed a ballot last November restricting vacation rentals. But the town voted it down, and the previous law states "you could not have vacation rentals," he stressed.

Then the Jerome code lists a number of permitted uses and conditional uses with approval.

The City of Sedona Short-Term Vacation Rental Enforcement Ordinance is much more specific about vacation rentals than Jerome's ordinance.

"The Sedona Land Development Code has prohibited the rental of any single-family dwelling in residential area for less than 30 days," states the Sedona ordinance.

"The city of Sedona is committed to maintaining its small-town character, scenic and natural resources that are the foundation of its economic strength and quality of life. The rental of private homes for temporary occupancy has been identified as a community concern due to the potential of increased traffic, noise, high occupant turnover, and density in single-family residential neighborhoods," the ordinance states.

"The City of Cottonwood does not have a separate short-term vacation rental ordinance. Instead, such uses are regulated as a lodging use under the definition of a hotel, which is permitted, subject to standards, in commercial zoning districts only," according to Berrin Nejad, Cottonwood development director, in an email response Friday.

The definition of a hotel, Nejad writes in her email, "HOTEL:  A building in which lodging is provided and offered to the public for compensation and which is open to transient guests.  Does not include Boarding House as herein defined. Hotels or motels are not indicated as a permitted use in residential zoning districts. A hotel may be permitted in commercial zones, subject to meeting development standards."

"The City of Cottonwood also has provisions for three types of Bed & Breakfast lodging uses. Depending on the number of guest rooms, these types of facilities may be considered in various residential zones, as well as commercial zones in some cases. However, the B&B uses are defined as having on-site management. So there are differences with short term residential rental properties," Nejad said.

However, the problem of vacation rentals in Yavapai County is turning into a zoning nightmare, said Dave Williams, land use supervisor for the county, in an interview last January. He said the problem of illegal short-term rentals is epidemic and has gone "beyond enforcement."

The county granted a use permit for only four such facilities in 2014, but Williams estimates that over 1,000 now operate illegally and are creating headaches for neighbors and planners.

Members of the Yavapai Planning Commission agreed in January they need to study the problem and perhaps create regulations.

Mayor Currier agreed with the Goldwater Institute attorney that he hopes that the town's negotiations with the four property owners will find a fair solution for all the parties.