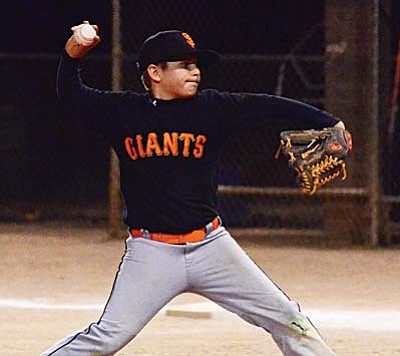 The Angels were no longer undefeated after the game.

Things started out bad quickly for the Angels. The Giants took a 3-0 lead in the first inning.

The Angels entered the fifth inning down 12-2. The team scored twice, but the game was called after the inning because of time.

After the win, Giants head coach Jeff Lynch said the key was how his team started the game.

"Our kids just came out strong," Lynch said. "They did the little things right, hit the ball well and battled."

On May 27, the first-place Giants beat the Verde Valley Little League Diamondbacks 16-6. On Monday, they will face the Rangers, who also are in first place.

Because Friday's game didn't count in the standings, Lynch said his team would approach the game more like a practice.

Lynch said how his team practices is close to a game.

"We practice like we play," he said. "When we come out and everybody is firing on all cylinders, there's no doubt we can beat most of the teams out there."

He added this win will give his team added confidence going into Monday.

"It feels good," Lynch said. "We've been playing good ball all year long, I think that's our 11th win in a row. These kids play good baseball. They do the little things, they pick each other up as teammates. These kids have a lot of heart."

After the game, the Giants had a quick turnaround with a practice at 8 a.m. on Saturday. Lynch said the practice would focus on little things.

"To shore up our defense," he said. "Make sure we're solid. Do the little things, work hard."

The Giants played the Angles already once this year and lost 3-1.

Monday's game for the Giants against the Rangers will decide who wins the Verde Valley Majors league and who will go to the Tournament of Champions.

The two teams have split the two previous times they've played this year. Lynch said he is expecting a challenge.

Reddell said his team just simply wasn't on its game.

Reddell added he thinks his team was too overconfident going into the game.

He said that was the main problem.

"I think it was we expected to win," he said. "We thought all we had to do was show up and we would win. We found out tonight that we have to play baseball."

Despite the one loss, Reddell said it's still been a great season for his team.

"It's gone real good," he said. "We have a good bunch of kids. We gelled together early. Every sport, you're going to have these kinds of games. Sometimes it just doesn't work. Tonight it just didn't work."

Reddell said it's been his players over the years that has kept him in the game for so long.

"I've enjoyed the kids," he said. "I still have high school kids and kids who have graduated out of high school, they see me on the street and I come and give them a hug. They're good people," he said.

He added he appreciates what his players gave.

" They come out here and they try their hardest. Just working with the kids, I've enjoyed."

Reddell said this year's team is one of the best he's coached.

The Angles are now off until the Tournament of Champions.

It starts Friday at Riverfront Park. The tournament is the best Majors teams from Little League district 10.

Reddell said for his team to have success it needs to play like it did for most of the season.

"We just need to play ball like we're capable of."

The players hope they can send their coach out on top.