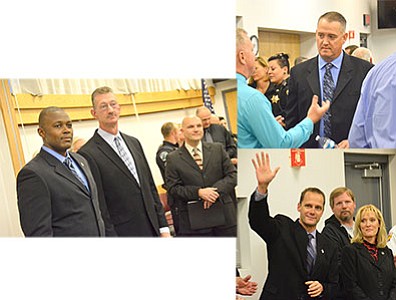 COTTONWOOD - City Manager Doug Bartosh says of the six police chief candidates who met the public in a community gathering Wednesday, "all are well qualified, all could do the job."

Bartosh continued, "I have to hire the successful candidate, but I won't do it by myself."

In addition to the public interviews, each candidate will speak with selected individual groups in extended interviews Thursday. Four of the candidates already work in the Cottonwood department either full-time or part-time. All have worked with or known Bartosh or Chief Jody Fanning.

Each was given five minutes to present their background for a crowd of about 100.

Gareth Braxton-Johnson works for Cottonwood Police, now assigned to the PANT team. His family move to Arizona in 1985. He attended Yavapai College on a basketball scholarship and then attained a BA from Lindenwood University in Missouri in sociology.

Braxton-Johnson joined Scottsdale Police in 1999 and got grounding in community bicycle policing, gangs and other police specialties. He started with CPD in 2005 as a school resource officer, worked internal affairs and in 2013 attended the FBI academy. Describing himself as a lifelong learner, Braxton-Johnson has passed a Law School aptitude test and gotten his MA from NAU.

Gary Eisenga is now a Commander in Cottonwood Police. He has been with the department 21 years and is raising a family here. Eisenga formerly served with Oregon's Lane County Sheriff's Office, and six years in the Navy. He describes himself as a first-generation American, born to Dutch parents who met in California.

He has worked in bike patrol, road patrol, as a school resource officer and helped organize National Night Out, Citizens Academy and is involved in Community Policing. Eisenga says his entire career has been working for citizens, a lifelong career in service and no other place would want to be chief of police than Cottonwood.

Stephen Gesell has been married for 15 years with three children. Now living in Central Coast of California at San Luis Obispo, he was an Army brat who took the opportunity to go to Arizona State University at 19 and stayed in Arizona for the next 23 years.

While a senior at ASU, he applied to the Scottsdale Police Department and moved through ranks for his career as bicycle officer to even controlling drug informants. He became a sergeant in basic training, patrol and internal affairs before he was promoted to commander and lieutenant.

He always wanted to return to California as police chief, but San Louis Obispo had a challenging political environment and he began looking for opportunities in Arizona. He said Cottonwood is the best America has to offer.

Jacquelyn (Jackie) MacConnell is retired from the Phoenix Police Department. She told the crowd she had a son late in life and retired at age 43 after 20 years to spend time with son.

"I loved my career and it was a difficult decision," said MacConnell.

She moved to the Sedona area to raise her son in a smaller community outside the Phoenix area. Her husband is with the Yavapai County Sheriff's Office.

In the Phoenix department, she worked in undercover as detective, bicycle officer, and tactical training detail. She lived in South America and speaks Spanish and created a Spanish training class. That helped working in Maryvale precinct with the community to reduce crime. An advocate for community-based policing, she believes, they "developed the best relationship up to that point" in Maryvale. Afterward, she left to work in the public affairs bureau, answering to the chief.

She has worked as a reserve office with the Cottonwood Police Department.

"It is great department. I will do a very good job serving employees and citizens of the community."

Jody Makuch, a Commander in Cottonwood PD, grew up in Northern New York. With few job opportunities at the time, he joined the Army to build a foundation for his dream of becoming a policeman.

He served seven years in the Army in various responsibilities in Germany and Italy. He was hired at the Oklahoma City Police Department for two years before joining the Cottonwood PD in 2000.

He says he loves the mountains, the scenery and views of Arizona. He began in patrol and loves the working the streets community policing. He has 10 years as commander.

Makuch has worked with K-9, motor and bicycle patrols, as a school safety officer and with police explorers.

Has has also served as an assistant coach for the girl's soccer team at Mingus Union. Makuch says he "looks forward to working with teamwork and integrity to solve quality of life issues."

Dale Walters grew up in Flagstaff, and spent summer in Verde Valley. His parents had a home in Camp Verde. He met his wife while going to NAU, married in 1989 and she has been a school teacher for 23 years. They have three children, who are athletes and scholastic successes. They also have been foster parents.

A police office for 26 years, Walters grew up with current Chief Jody Fanning and attended police academy with others on the force. He started out with the Coconino Sheriff's Department and transferred to Page before moving to Phoenix to advance his other skills.

"But the Verde Valley is home to me," he said. "I felt very successful working in Chandler, working undercover, in patrol, ran narcotics unit, became lieutenant in community services.

"I am not looking for a position, I am looking for a community for my entire family and hopefully have a long career in an outstanding police department."