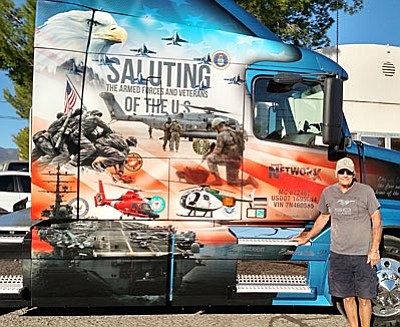 About a year ago, Cottonwood's Fred Fossett read an article about Wreaths Across America, an organization whose mission is to place wreaths on Veterans' graves across the country.

Fossett was inspired to be part of the effort to the point that he had a special Veterans tribute paint job applied to his 2007 Volvo big rig. Further, Fossett wanted his Wreaths Across America contribution to be literally "across America."

This week, he began his mission, driving to Maine to retrieve the wreaths and then returning them to veterans cemeteries in Billings, Montana, and Seattle, Washington.

"I decided to make a tribute to the veterans and those who serve on my truck," said Fossett. "The driver's side features the battleship Missouri on which the surrender of Japan in World War II was signed. The passenger side is a collage of all branches of the military including Homeland Security. I am very proud of the design and finished product. The last verse of the National Anthem symbolizes what this stands for."