Life in the Slow Lane: "There's a dead otter on my porch" 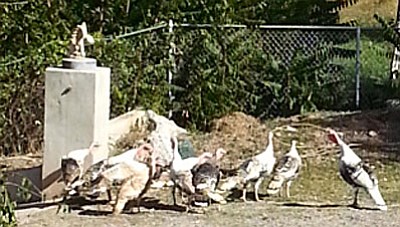 I only thought to reach for my camera as the last group of toms was studying her.

As I returned home last night, I saw a black mass at the top of the porch stairs. At first I thought it was one of the cats. Impossible!

None of the cats would ever think to sleep there, not even Bear's cat,.

No one wants to be in Bear's 115 pound way when he comes racing down the stairs as he heads out to confront whatever critter he expects Moosie to take care of.

My next thought was that it was one of the small dark turkey hens. My heart started pounding. Could Moosie have found a way into the new coop?

I hurried up the steps only to stop in surprise. There, dead as a door nail (Door nail? Really? I mean, if we're going to use that sort of metaphor wouldn't it be better to say dead as a coffin nail?) was an otter.

THE otter. The marauding otter who I'm sure killed at least one of my turkeys. The same one that was looking to get its fairly impressive canines into my neighbor's bird the other night. I leaned down to look closer. There were no bite marks on her, no blood. She looked like she walked up the steps and curled up to sleep.

I knew instantly who had broken her neck.

Just then, Moosie came out of his dog house. He has a really nice dog house. It used to be the entrance to the laundry room, but then the remodeling happened and a wall went up. That left a useless doorway leading into a 4 foot by 8 foot closet of sorts. So, the doorway came out and a dog door went in, as did a little insulation and the cushions from the porch furniture which the dogs had already ruined. Moosie loves it. Bear would rather sleep in the middle of the parking area in the rain, but Moosie occasionally talks him into joining him.

As Moosie stopped next to me he looked up, his forehead wrinkled (he's part Shar-pei) and his tail low and wagging. I could see it in his eyes. "I was good to do this one, right? You didn't say I couldn't kill this kind of thing, did you?"

We've both been working very hard on him controlling his instincts. I say we, but I mean me. I'm learning how to be a dog owner. He now lays down about a dozen yards from the turkey coop while I'm moving the flock in for the night. He's not allowed to follow me when I'm holding birds, as that tends to excite him. I've even seen him sleep while the birds squaw and mill around him. This is all great progress and I'm hopeful that--if I remember that I always need to be in charge--he won't have another turkey incident.

I stared down at my amazing dog and was really torn. I love knowing there are otters living around me. There's something so magical about them and what they stand for: a stable otter population means healthy water and healthy land. But I also know that if the otter had been in the ditch, Moosie could never have caught her. He's fast for sure, he's even nabbed a trout once. But I can't imagine he could ever be fast enough to catch an otter, not when otters are the masters of their element. That can only mean one thing. She must have been on dry land when he came across her. And the only place I could think that she would have been was investigating the new turkey coop. Moosie had done exactly what I expected of him and kept a dangerous predator from my livestock.

I leaned down and gave him all the love and praise he deserved. I even let him keep his prize on the porch for the rest of the night. (Oh yuck.)

This morning, I moved the corpse down to the far edge of the parking area, intending to bury her later. Before I got to the digging part, the morning parade of turkeys appeared. I didn't pay any attention to them gathering in that corner until I noticed the silence. That's very unusual for turkeys; they're always talking to each other. I watched them as they moved past her in small groups. Each group would pause for few moments, cocking their heads from side to side as they eyed her cold dead form. None of them moved to peck or investigate, which is what turkeys usually do when they encounter something new. Instead, when each group finished studying the dead otter, they simply turned and walked away, doing so together.

That left me wondering if they recognized the predator they'd seen too often in their coop.