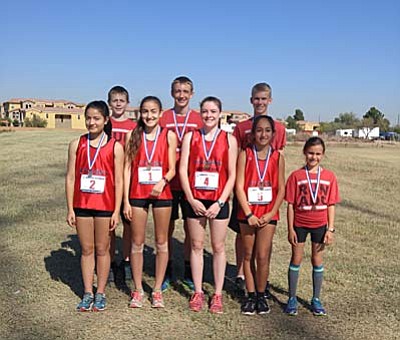 Allyson Arellano won her third consecutive USATF State Cross Country title as she blew the 15-16 girls division away by finishing a minute ahead of the second place finisher, clocking a dominate time of 19:09 over the 5k course.

After a convincing win, Allyson will be traveling to Albuquerque on Saturday to try and capture her second consecutive regional title.

"She was very dominate in her win. At the first mile, she already had a 15 second lead on the 2nd place individual," said Aftershock Coach Micah Swenson.

Penny Fenn was the other State Champion for the Aftershock runners, winning the 17-18 girls division. Though it may be surprising, Fenn blew away her division by a larger margin than Arellano as she clocked the 5k course in 19:15. In the past five years, Fenn has never finished lower than 4th at the USATF State Cross Country meet and has a couple of runner-ups said Swenson. Karen Arellano finished two spots behind Fenn taking home a third place finish after battling some allergies that impacted her breathing.

"Karen was able to hold it together for a solid performance," Swenson said.

The rest of the Aftershock runners also turned in great times at the state meet.

Lobato has only been with Aftershock for a short-time and Swenson says her improvement can be attributed to her training week in and week out.

"This race (13-14 girls) was pretty loaded so a 9th place finish is impressive," Swenson said. "In the short time that she's been with us, she's really made a substantial leap as a racer. It really boils down to her training. She just doesn't have a bad practice."

Josh Reilly finished 7th in the 13-14 boys division, which included the 2014 national champion of the 11-12 age group who came in third at Friendship Park this weekend.

"It was another race that was loaded with talent and experience," Swenson said.

In the 15-16 boys division, Jon Ulibarri turned in another decent performance for the Aftershock crew, placing 9th.

Swenson says he just keeps getting better after each race and is really developing into a great runner.

On Saturday, the Aftershock Distance Running club will travel to Albuquerque for the Region 10 championships which will be held at Balloon Fiesta Park.

This is the same site that nationals will be held on December 12. The top 30 individuals in each age/gender group this weekend will qualify for nationals.