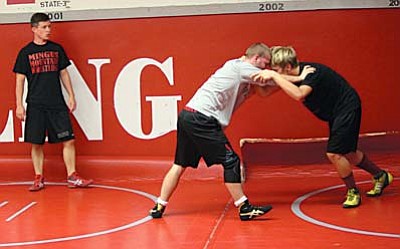 COTTONWOOD- 415 wrestlers from around the state of Arizona traveled to Cottonwood on Saturday for the 24th annual Mingus Mountain Wrestling tournament.

Teams from Yuma, Tucson, Phoenix, Prescott, Flagstaff, Page, Tuba City, and the White Mountains were just a few places that teams came from to compete in the tournament. The Mingus Mountain Wrestling team placed 5th out of 21 teams and were the second-highest school team to place, the rest of the teams were club teams, or all-star teams, said Mingus Mountain Wrestling Coach Klint Mckean. 12 Lobo wrestlers compete in the middle school tournament that had a total of 315 competitors. The Lobos had three individual placers for the middle school tournament. In the 68 pound division, Kai Miller, battling through illness and injury, showed true toughness by gritting out a top-four finish, Mckean said. Elijah Miller was the lone champion for the Lobos as he took home the 73 pound division. His victory this year now makes him a two-time champion at the Mingus Mountain Wrestling tournament. Mckean said the young wrestler scored at will with his single-leg take downs.

Issac Mckean was the last top-four finisher for the Lobos, taking home a second-place finish in the 83 pound division.

Mckean pinned three of his five opponents, and as a 6th grader competed returning state champion and 8th grader Johnny Sierra to the brink before losing a nail-biter.

For the elementary school tournament, the Muckers had 24 wrestlers compete out of 100.

"The coaches and I are excited at both the growth and talent of our grade school team," Mckean said. "It definitely bodes well for the future of wrestling in Cottonwood at the middle and high school levels. My hope for wrestling in Cottonwood is to continue to build our team to the point that the best student-athletes in the valley want to join us because of our success academically and athletically."