Briana Young takes over as Head Coach at Mingus 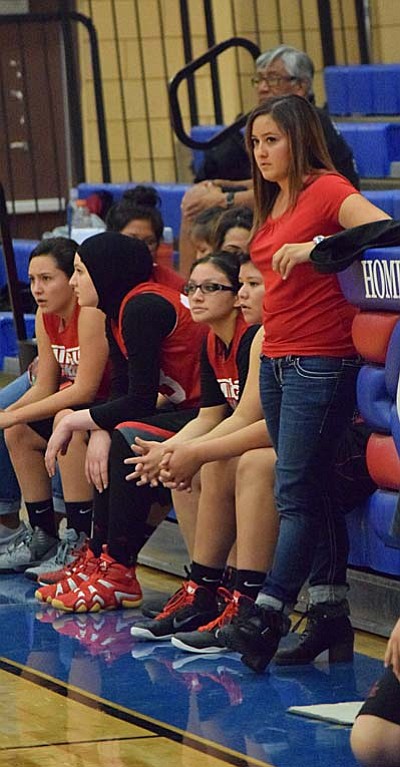 Enter, Mingus alumni and former freshman team coach, Briana Young and the Marauders are ready to take on the 2015-2016 season.

Young, who first coached the freshman team back in 2009 while she was still taking classes at Yavapai College, said obtaining the Head Coaching job for the varsity program was "sudden, but a long time coming."

Young has had two stints as the leader of the freshmen program when she took over again last year until the program needed her players to move up to strictly JV and Varsity.

Coming into the program, Young noticed a lot of things in the first week of tryouts that she believes will play as strengths for the Marauders this year.

"She is a tremendous strength on both sides of the court," Young said. "She has developed some great instincts for seeing the floor and plays with all heart when it comes to defense."

Koeppe will be joined on the perimeter by Lisa Jaimes who Young says is a "natural leader."

"Defensively and playing the left wing, she is yet another weapon on both sides of the floor," Young said.

Manning the paint for the Marauders is yet another senior in the form of Sharon Rehborg who Young says will be the leading scorer under the basket and can be deadly from outside as well. With five seniors starting at any given moment, Young will look to junior Emily Bauers as the Marauders six man.

"She is a threat both in the paint and on the wing," Young said.

Even though Young is in her first-year as a Head Coach she believes that with the help of assistant coach and JV coach Bob Young she will be just fine.

"This may be my first season as a varsity coach, but my assistant and JV coach Bob Young is well seasoned and has never steered me wrong yet," Young said. "With that in mind I expect us to make a big shock in our division. My goals are to make us a tough team to beat anywhere we go."

In the 2015 season the Marauders will be playing teams that they have played in the past. With the realignment of divisions, Mingus will face new teams such as Page, Cactus, Independence, Agua Fria, Barry Goldwater, Deer Valley, Washington, North Canyon, Verrado and others. Some teams remain the same though as the Marauders will still play Bradshaw Mountain and Payson.

"We don't play the same teams we have always played and we will not play these teams again next year after the division changes so every game is a game to look forward to." Young said.

After a preseason tune-up against Camp Verde and Seligman on Friday the Marauders will open their season when they go up against Northland Prep on November 30 at 7 p.m.