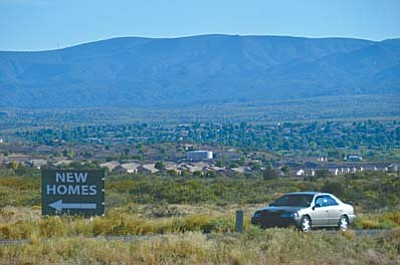 A sign is posted in the general area where the new development of home has been proposed just south of SR 89a and north of the Verde Santa Fe development. VVN/Vyto Starinskas

COTTONWOOD -- The massive 760-acre parcel of gently rolling land opposite the Verde Santa Fe development north of Cornville Road seems to have a new bloom of interest.

Cottonwood Assistant Development Services Manager Morgan Scott told the Verde Valley Transportation Planning Organization last week that talks have begun again on the property originally zoned for the Republic Properties, like Verde Santa Fe, but on the north side of Cornville Road.

In recent years, the parcel was annexed by the City of Cottonwood and the city has been anticipating eventual development by Brookfield Properties.

There is plenty of planning needed and no one is going to break ground right away. But, the proposed name "89 and Vine" appears to perpetuate the linkage between the development and the Verde's newfound wine industry economy.

Ten years ago, the talk was that the development would mimic the golf-based subdivision that Verde Santa Fe had become along with big box stores. Then, the project was shelved in the doldrums of the recession.

In January 2013, Phil Peterson of Brookfield told the Verde Independent that, "Instead of a golf course, there would be lots of open space surrounding the residential area."

At that time, Peterson said, the commercial development would adopt an "old frontier Arizona" architectural motif, he said, along SR 89A. He said the plan is to get 15 to 20 different wineries in a series of buildings all together and have a joint wine tasting area, surrounded by some cafes, boutique-type restaurants and then the several acres would be surrounded by vineyards. "We would have the local wineries participating with us to help get that established," he said.

Scott said development is proposed to build 2,500 homes, at most, in 15 phases starting on the northeast corner of the project and then working south.

Brookfield Marketing Director Craig Peterson said the number of units could be as few as 1500.

A new intersection is proposed at Bill Grey Road and 89A, tentatively dubbed "Vine Road." Commercial development would be nearest the highway.

Jay Stuckey of Republic Properties, which owns the ground, is a partner in the proposed project and has contributed a lot to the new theme, said Craig Peterson, who added that they have been talking with the Verde Valley Wine Consortium about establishing vineyards within the property.

Craig Peterson admits that planning is very preliminary at this point and things could change over time. He was not ready yet to identify any time frame for groundbreaking. He says a lot depends upon decisions with the city.