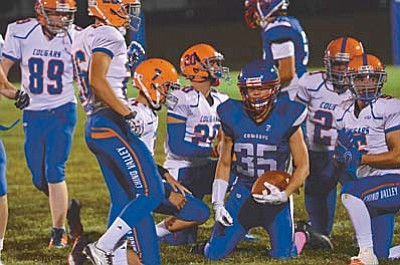 Ryan Loza emerges from the bottom of a pile up during Camp Verde’s game against Chino Valley on Friday.(Photo by Vyto Starinskas)

After a 26-12 victory over the Cougars the Cowboys have moved up to the #29 spot in the AIA rankings.

The Cowboys battled their way to victory behind a bunch of stellar performances.

Sophomore quarterback Payton Sarkesian led the way in the passing game completing 13 of his 20 pass attempts for 113 yards and a touchdown through the air. Sarkesian spread the ball around too four different receivers, finding senior Dakota Brueland for his only touchdown pass of the night.

Brueland excelled in the run game as well for the Cowboys, racking up 88 yards on only four carries, and broke off a nice 48-yard run.

He scampered into the endzone to put up six for the Cowboys to add to the touchdown catch from Sarkesian. The shifty senior runningback also returned a fumble recovery on the defensive side of the ball for a 99-yard touchdown.

Senior Jaysen Leonard had another stand out night for the Cowboys like he has all season. Leonard caught the ball three times out of the backfield for the Cowboys for 60 yards, and added 86 to that total on 15 carries. He also found the endzone once on the ground. Senior Trevor Heyer was also a big target for Sarkesian, as he brought in five passes for 42 yards over the course of the game.

Heyer along with other Cowboys excelled on both sides of the ball in the victory over the Cougars. Heyer came down with two interceptions throughout the game and racked up seven tackles for the Cowboys. Leonard was another force to be reckoned with on the defensive side of the ball, bringing down the Cougars 12 times throughout the Cowboys victory.