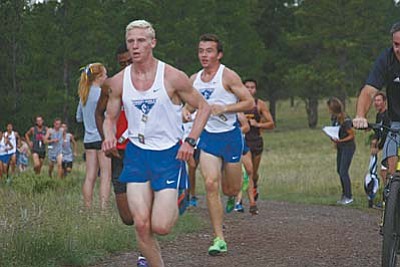 CASA GRANDE - After a few missteps and sputters this season, the Mingus Union girls cross country team finally put it all together Friday by claiming runner-up honors in the small school division of the Desert Twilight 2015 Invitational.

"All of the girls ran their best times of the season and all felt good so I think we are on the right track," said Mingus girls coach Tiffany Goettl. "We still have a month to go and the girls will really need to push their training to another level over the next few weeks."

Mingus was just 6 points shy of the overall low score of 95 achieved by Coconino High School. In all, 36 teams participated in the girls small school race. Most impressive for the Marauder runners was the 1-minute, 45-second gap between its first and fifth runners. As a team, the Marauder runners averaged 20:52 per runner over the 5-kilometer course, which as a team was just 1-second off the average pace of the Coconino runners.

Said Goettl: "Our freshman, Meg Babcock, improved the most with a 2 1/2 minute time improvement.  She is going to be someone to watch over the next few years."

The Mingus boys finished 19th among 43 teams with junior Keegan Cain leading the way with a 17:22 clocking and according to Coach Jim Bostwick earned "our runner of the week as he improved his best mile pace by 23 seconds and improved his time from last year by 49 seconds."

The Mingus boys competed without their No. 1 runner - senior Joseph Sandoval, who competed in the elite "Sweepstakes" race. In that race, Sandoval was 84th among 197 runners with a 16:33 clocking for 5-kilometers. "It was his was his fastest time of year by 13 second per mile," said Bostwick.

Coach Micah Swenson's Aftershock Distance Club competed in the Citizens Race in the Twilight Distance Classic with his girls claiming the top 3 finishes in the 15-19 age group division.

"We took 9 athletes down and all 9 had solid races," said Coach Swenson. "We had 6 age group medalists."

Allyson Arellano was the girls individual winner in the 15-19 division, with an 18:06.3 clocking.

"She was really targeting the 18-minute barrier and gave a great effort to make it close," said Swenson. "There's about 15-20 seconds we hope to cut next weekend when we race at Mesa Community College. There are just a few minor adjustments to make and she'll be a 17:45 5K runner next weekend.

Aftershock's Penny Fenn also turned in a very solid performance, clocking in with a personal best time of 18:46.8 for 5K.

"Like Allyson, she's been a little faster in road races but those are two totally different race environments because of the racing surfaces. The back half of Penny's race was strong. As the race strung out, Penny was able to pass several runners and climb up through the race field," said Swenson. Karen Arellano, who ran the race in tandem with boys teammate Trenton Stafford, was third in the girls race. "They've been training partners the last few weeks in practice and hopefully this partnership will be a good one for both in the weeks ahead," said Swenson.

On the boys side for Aftershock, "Our first two finishers were Jon Ulibarri and Josh Reilly. This is the first Cross Country season for Jon with us and he's developing nicely. Jon's wheelhouse is really more in the middle distances, 800-meter and 1500-meter, but he's turning himself into a strong distance runner. He's been very diligent and patient in this whole process and is now starting to really see the fruits of his labor. He was our top finisher at 17:42.1. Josh put together a strong race with a time of 17:55.1. He's only a freshman so the ceiling is very high."

Skyler Storie, a 2013 Mingus graduate and now a junior at Dixie State University in Utah, won the women's division in Saturday's California Baptist Invitational. It was her second consecutive win of the season as she finished the 6K (3.75 miles) course in 21:29.04 to lead the women's team to a third-place finish.

Earlier this season, Storie won the women's open division for the second straight year at Flagstaff's George Kyte Classic. She covered the 2.6-mile course in 15:39.7, shaving 14 seconds off her winning time from last year. The win earned Storie the Pacific West Conference women's Runner of the Week award.