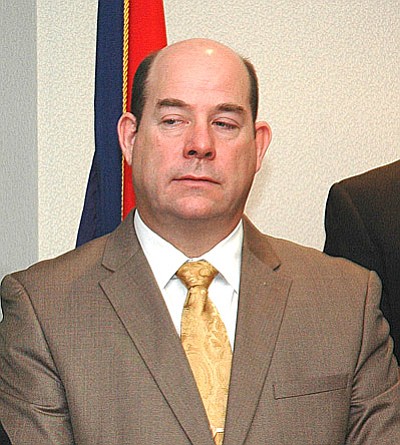 PHOENIX -- Two politicians, one who doesn't live in the district and one who just recently moved there, hope to convince voters in the state's First Congressional District they should be elected.

House Speaker David Gowan, a Sierra Vista resident, is touting his "extensive conservative record' as reason he should be the Republican nominee for the congressional seat being vacated by Ann Kirkpartrick.

She is seeking the Democrat nomination for the U.S. Senate seat occupied by John McCain who is hoping for yet another six-year term. But McCain first has to fend off some challengers, notably state Sen. Kelli Ward, R-Lake Havasu City.

Also jumping into the CD 1 race is Pinal County Sheriff Paul Babeu. He had been a resident of the San Tan Valley before moving to Casa Grande -- and into the district -- this summer.

Babeu, who abandoned a similar campaign in 2012, gained statewide and some national attention for his high-profile campaign against illegal immigration.

They join businessman Gary Kiehne who lives in the district former Secretary of State Ken Bennett who said he is moving to Maricopa -- into the district -- within 10 days.

Kiehne lost a three-way race for the GOP nod in 2014 to Andy Tobin -- who also did not live in the district -- who went on to lose to Kirkpatrick. Bennett made an ill-fated bid for governor in 2014.

Because this is an open seat, it becomes a political opportunity for the Republicans to boost their edge in the U.S. House of Representatives. And that likely means the race is likely to draw a lot of out-of-state money.

Babeu minimized the significance of his recent move into the district.

"I've always represented the people of Pinal County,' he said. "And the majority of my county is in this district.'

And he suggested it would have made no difference had he kept his San Tan Valley residence.

"What's most important are these issues,' he said, all focused around what he said is the overreach of the federal government. That includes not just thwarting efforts by local authorities to deal with illegal immigration but also the imposition of federal rules and regulations on everything from air quality to logging.

Still, he said Tobin's residency was an issue.

"He never did move into the district,' Babeu said. "And it was a weapon that Ann Kirkpatrick some say effectively used against him.'

Gowan, however, has a different take on the whole residence issue, pointing out that Tobin did, in fact, win the GOP primary despite not living in the district. And he rejected Babeu's contention that's what led to Tobin's defeat in the 2014 general election.

He also said his bid for CD 1 is not a stretch. Gowan pointed out there is some overlap between his legislative district and the congressional district, calling himself "a fit for the district' given its largely rural character.

Gowan takes some credit for the fact the state is now on target for a structurally balanced budget for the first time in the seven years he has served there, with revenues exceeding actual expenses.

"We need to take that back to Washington, D.C.,' he said, to address an $18 trillion deficit.